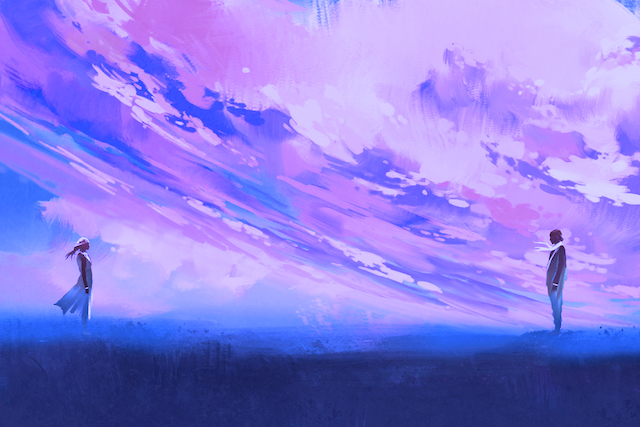 About five years ago, I had a falling out with a close friend. I was irritated because she didn’t do the things I thought she should and she didn’t give as much as I did. I felt I had been very generous with her, and I expected her to do the same. I felt she owed me.

My anger became unmanageable and started seeping into pretty much every interaction we had. She began cancelling dinner plans and camping trips. She wouldn’t call me back after days of me leaving a message. It happened out of nowhere, and of course everything was her fault.

Except that it didn’t. And it wasn’t.

Not too long ago, I was a bit of a control freak. I didn’t know it, of course, and I would have described myself as open-minded and easy going. In reality, I was tormented by my own expectations.

I am an artist by trade, and in my art studio, I have many tools. Paintbrushes, sanders, stencil cutters, and paper punches fill shelves up to the ceiling. However, I tell people that the most important tools I use are flexibility of mind and a practice of not having expectations as to the outcome. This allows new and amazing techniques to be discovered and yields paintings that continuously surprise and delight me. I find these tools are useful outside of the art studio as well.

As time went on and distance grew between me and my friend, I began to feel enraged by her apparent apathy toward me and everything that I “had done for her.”

I thought to myself, “I would never treat anyone that way. How dare she do that to me?” and “After all I’ve given her, she should want to give back!” Every thought I had praised me for all the good deeds I had done and blamed her for ruining our friendship. I was the victim and she was the wrong doer.

One day, I sat down to enlighten her about how she had negatively impacted our relationship. Her reaction was horrifying to me. She said she was going to take a step back from our friendship.

I couldn’t believe what I was hearing. I mean, I was telling her how she could singlehandedly improve things. What was wrong with her that she didn’t understand that? We stopped speaking and I didn’t see her for a long time.

Then something life changing happened—sobriety. In the first year after I quit drinking, I learned a lot about myself and my need to control just about everything in order to meet my expectations.

I learned how my expectations of others (unexpressed, by the way, because “I shouldn’t have to say it!”) and the anger that followed when people didn’t act the way I thought they should, actually drove people away.

The entire time our friendship was breaking down, I thought that if she would just do the things I wanted her to do, not only would our friendship be fixed, but everyone involved would be better off. I knew better than she did. My way of living was better than hers. She, of course, ran away from me like I was on fire.

My need to control others was unfounded, unrealistic, and unattainable. It was a hard thing to admit that my way wasn’t better than her way and, in fact, people weren’t abandoning me. I was driving them to leave. I saw that other relationships in my life were also going down this path. I had to change.

One day after surfing, I went to sit on a bench overlooking the water. One of the “old guys” we surfed with, who lived across the street, came and talked with me as the sun was setting over the ocean and I was lamenting about the stresses in my life. He said one of the most important things anyone has ever said to me: “I don’t do stress. Stress is optional.”

WTF? How on earth does one not get stressed? Teach me, Oh Wise One. I thought deeply about this and about my issues with expectations and control. I needed control in order to meet my own expectations. When those expectations were not met, anxiety, anger and depression followed. Where does stress fit in?

The stress comes from trying to control actions that I think can bring my expectations to fruition. Have you ever seen the YouTube video of the zoo keeper trying to take a photo of all the baby pandas together? He expected a cute shot. All he got is a video of him trying to put baby pandas in a line, as one by one they continuously wandered off.

I know that’s kind of a cut and dry example, and life isn’t always cut and dry. However, the primary reason that I would get so pissed when my expectations were not met is rather simple: “My way is superior to everyone else’s way. How can people be so stupid and disrespectful?”

I don’t want to be an angry person. I don’t want to be unhappy with the people in my life. At some point, I realized that all of the control I was attempting to put on others was really me trying to make others meet my own expectations. That doesn’t work. Like ever. And it creates a huge amount of stress and frustration akin to trying keep baby pandas in line.

The real questions are: Who do I think I am? Why do I think I can control anything? What does it really matter if people are late, or my flight is cancelled, or my hat got lost when it flew off the top of the car.

Do these things affect my life? Sure, they can. Is it worth having an explosive hissy fit and making myself and everyone around me miserable? Uh, that would be a no. (Embarrassingly, the loss of that damn hat came close to ruining our evening.)

Advice from an Artist—Three Ways to Let Go:

1. Have zero expectations about how anything is going to turn out in the end.

It’s easier said than done, but if I went into the art studio expecting a certain painting to be created, I would be disappointed all the time. It’s so much easier to have an open mind and go with the flow.

This is also true when it comes to other people. By accepting the fact that people are not predictable, I am not attached to outcomes about how they “should” be.

2. Stop trying to control everything.

My passion is creating, but I can’t always get in the studio to paint. And guess what? I don’t pitch a fit. I simply do what needs to be done to continue on.

For whatever reason, this is easy for me to apply to my business, and harder to apply to situations that involve people. I have to peel my fingers from the white-knuckle grip they have on how people should be and be okay with the possibility of “my way” not being an option. Perhaps somebody else has an awesome way I’ve never even thought of.

3. Be flexible and don’t be attached to outcomes.

I choose to open my mind to all the possibilities. In the studio, experimentation and the ability to adjust comes very easily. In life, not so much. Last minute changes in dinner plans aren’t going to kill me. When someone is “inconveniencing” me by wanting to meet at 8:00 instead of 6:30 I don’t get pissed anymore. I go for a hike because now I have time to.

Does that sound too simple? I don’t think it is.

My old friend and I have begun to repair our friendship. She moved away and I miss her dearly. We have talked about the past, but not in great detail. I try to show her that my thinking has changed and I don’t want anything from her but her friendship. It’s a hard thing to repair when you live far away but it’s mending little by little.

I no longer expect her or anyone to think like me. When I start feeling superior, I have to remember that I’m no better and no worse than any other person on the planet. I hope she forgives her wayward friend. At the time, I really thought that I was doing her a favor by showing her a better way to live. It was hard to realize that my ego was running the show.

When I’m working on a painting and I make a mark that I didn’t intend to, I don’t look at it as a “mistake.” I look at it as an opportunity to go down a road I may not have seen had it not been for that out of place mark. This is how I strive to live my life now. When a monkey wrench is thrown in, I put it in my back pocket figuring that a wrench may come in handy at some point.

And if it doesn’t, that’s okay. Just as with my art, I choose to live open-minded to all experiences. Also, just like my paintings, life isn’t only made up of straight lines. There are twists, turns, and interruptions. The question I must ask myself is, do I want to put up a fight whenever something unexpected happens, or go with the flow and gracefully see where this new road leads?

We can’t control other people and situations. But we can choose to set expectations aside and not put so much emphasis on how things are going to end up. After all, it truly is about the journey. And the destination? Well, sometimes the most beautiful views are the ones that we stumble upon unexpectedly, while on the way to where we’re “supposed” to be.

How High Expectations Can Lead to Disappointment, Depression, and Anxiety