Forgive Yourself and Change Your Choices
By Francesca Tulk 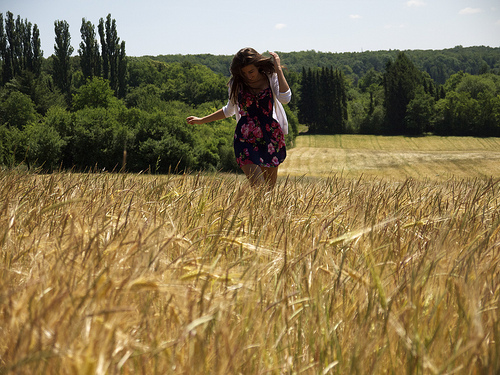 In May 2008 my daughter’s father had arrived home after staying out all night. He told me he no longer loved me, found me attractive, or even fancied me, and that at eight years younger than him I was “too old.”

I was completely stunned.

While our relationship had many of the usual flaws, we had never fought, and I’d believed him one month prior, after we bought a new home together, when he said he was the happiest he’d ever been in his 45 years.

After the initial shock had worn off, I moved into a house with my daughter and I began to reflect back. I realized that for the previous eight years, I had in fact been living in some sort of cloud-cuckoo land.

I realized I had overlooked many real issues that had existed between us because we had a child. I had worked full-time, putting our daughter in childcare, while he remained unemployed and “too depressed” to look after our girl, spending hour after hour laying on the sofa watching movies.

I had never questioned how he went out, bought a sports car, two motorbikes, and a yacht after coming into some family money, while I continued to pay for all food, child care expenses, and household expenses.

I suddenly realized all the “girl friends” he had and communicated with on a daily basis, via text and email, were in fact “girlfriends.”

And then I got angry; in fact, I became wild.

But I didn’t get angry with him; I turned that anger on myself. I hated who I had become.

How had I allowed myself to be hoodwinked by this financial opportunist?

This anger manifested in excessive spending. I racked up a lot of debt and I found myself feeling out of control.

Push came to shove when the ex reneged on a loan with my name attributed to it and I had the bank threatening to take my house away if I didn’t pay up.

My anger at my out of control spending was at a peak and I realized something had to change. I knew theoretically that I had to simply stop spending and make a budget, but it took some deep meditation and soul searching to be able to reach that point.

I knew the first thing I had to do was forgive myself.

I had to forgive myself for falling for a man, who I then allowed to walk all over me for fear of losing him and ending up alone.

I needed to forgive myself for “overlooking” his behavior and enabling him to live, in essence, a bachelor’s life while supposedly being partnered to me and parenting our young child.

I needed to forgive myself for spending to soothe my pain.

Forgiving ourselves can sometimes be the hardest thing, and yet it’s the easiest way to change everything.

It was, at this point that something changed, both mentally and financially for me.

I actually said, aloud, “I forgive you Francesca.”

I actually felt physically lighter. I began to make some conscious decisions about what I spent, how I spent it, and when I spent. I discovered it was totally possible to live a wonderful, exciting, fun, joyous life without having to spend excessively.

I began to write about my experiences with money, spending, and pain. I found I was not alone and that I could relate to many others, as they could to me.

Each day, especially with the help of Tiny Buddha, I take a daily saying and apply it to my own life, making it richer and more fulfilling. This was how I chiseled away at my anger, one tiny but at a time.

One other thing I knew I had to do was to forgive my ex. I know now that I am totally responsible for my choices, but I needed to forgive him in order to fully forgive myself. So once again, I forgave him out loud.

And once again, I felt the weight of any residual anger dissipate.

Forgiveness can change our whole outlook on life. It makes us better people.

Even the little things can make a big difference. Whenever something happens that I might feel a little annoyed by, I take a moment to think about it. Will it matter a day from now, a week, a year? On my death bed would I even remember it if someone told me about it?

I also consider why things have happened, and what part of the situation I might not know about or understand.

When we forgive, we also show the people around us how it’s done. Many of us spend so much of our lives holding grudges. What if we never wasted a moment of our beautiful lives on hate, antagonism, and vitriol, toward ourselves and others?

Imagine the complete universal shift if everyone who ever felt pain, resentment, or rage toward another human being was to let it go through forgiveness?

Peace can be achieved far more easily than we might believe if we choose to be role models. We may only affect one person, but that person affects another, and so on, creating a more loving, forgiving, beautiful world.

If you do nothing else this year, forgive yourself for the choices you wish you didn’t make. We all do the best we can at each point in our lives. As we learn, we do better.

Francesca Tulk is the Tasmanian Minimalist. She blogs at http://www.tasmanianminimalist.com and teaches 9 and 10 year old children. Her aim in life is to have a completely decluttered home and fall asleep to the sound of the ocean waves. You can find her on twitter @tasmanianm. She lives in Tasmania, Australia.