Lost Love: What It Means to Move On
By Hong Rui 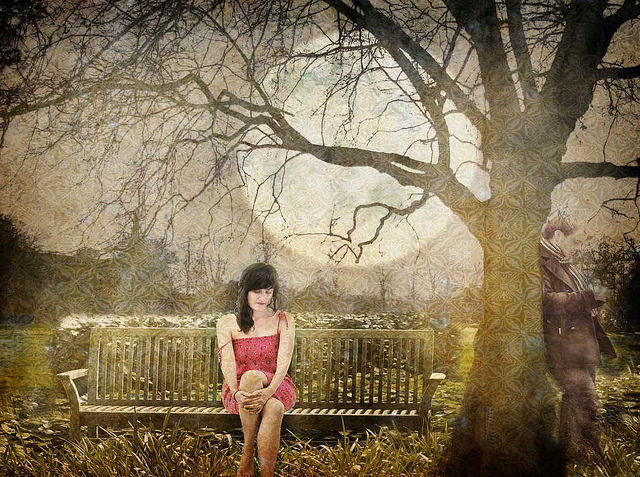 I met a special someone. It was my first taste of love and I was sheepishly drunk with it. His were eyes I could look into forever, and he had a voice I could hear till the end of time. It was absolutely frightening.

We were colleagues. I unwittingly got involved in his life and eventually found myself wanting to get even more involved.

After a period of ambiguous yes-no-maybes, he exited the picture for good. He never wanted to talk about it, or wanted anything to do with me again.

I was distraught, destroyed. Shot.

There was a cacophony of voices, concerned friends, self-help books, parental wisdom all cooing, screaming, demanding me to let it go, let him go, move on.

They were all voices echoing the same rational advice. It’s only logical to disconnect, eject, and proceed. Move on.

Not a day went by without me cross-examining myself for faults, things I should or shouldn’t have done, things I could do to fix it.

Self-help books and long runs with blaring earphones only gave a brief respite. Reason left me as soon I put the books down. My mind wandered back to the hurts when I stopped running, breathless and ever-desperate.

Why linger? It was a horrid state to be in. I really wanted to snap out of that self-absorbed paralysis, but something kept me there.

After six months of marinating in the much celebrated soup of love, loss, and lament, I finally fumbled out of it.

There was no under-the-Bodhi-Tree momentous revelation, but rather a gradual learning and realization, almost anti-climatic, after all the drama.

No one is spared from metaphorical bullets, but no one has to stay hurt. I’ve experienced a generous slice of pain and tasted a ludicrous sentiment:

It’s ludicrous, in the sense that amidst the injustice and hurt, the idea of forgiving seems to border on divine martyrdom. But what I’ve experienced and discovered wasn’t a saintly sacrifice.

It was something I arrived at, a lucky tumble into the clearing. It was a long fumble in the dark. And what I’ve learned is:

I literally ran miles to get my mind off him—physically moved away from him at work, tried to write him off as I thought he did to me.

But whenever there is a quiet moment, his face comes back with a vengeance. There is no “clear history” button; there is no shutting emotion out.

We cannot process feelings mechanically, surgically remove “bad parts” from our being. If that were even remotely possible, the world would be devoid of sappy love songs and affluent shrinks.

Yogis mediate their reflexive response to emotions. They don’t put a plug in emotion—they “sit with it.”

I didn’t meditate ceremoniously; I was probably face-deep in a hearty slice of cake. But at some point, I was finally able to quiet down and face the issue, crumbs and all.

The most ironic thing was that not only was I running away from the problem, I was also running in circles.

I was pointlessly replaying events in my head, ceaseless analyzing, obsessively scrutinizing my actions, and wallowing in sappy country music and dessert.

Not only does nothing get solved, nothing else gets done either. I was able to ask myself, and listen for the first time, the first most important question: What am I doing?

Life is not cruel when it does not wait. Life always goes on, whether we are in the mood to join it or not.

I had to ask myself: What is it that I want?

I wanted talk about it with him. I wanted him to tell me, face to face, what went wrong. I wanted closure. I wanted my pain to be acknowledged.

Because I couldn’t get the confrontational closure and couldn’t get him to acknowledge my hurting, I locked myself in limbo.

When a valued relationship ends, it’s natural to lament, but it’s easy to become morbidly self-indulgent, stewing in the predicament.

Like having blinkers on, I’ve excluded everything else, even the fact that other people hurt, forgetting that my pain is but one in many.

Everybody hurts. Even him.

It never occurred to me that he may be having a difficult time, as well. I demanded an answer. I demanded an explanation. He wasn’t ready to give one, and didn’t.

I was desperate, became obsessed, and he withdrew entirely. Of course, he could have handled it in so many alternative ways than silent disengagement. But blaming is not the point.

When I stopped feeling bad for myself, I was able to see the effects of my actions on his side and consider his perspective, empathizing with his difficulties.

Trace the blame if you will, but the meeting of two individuals and their eventual parting isn’t the fault of one.

So bent on confronting him, I deprived myself of closure in any other ways than the way I’d envisioned. He didn’t force me to be in pain. I did.

We are all one in pain—we act from pain and make mistakes from pain, and we all deserve forgiveness and kindness.

I realize that he only did what he thought was best at that moment. He didn’t make the best choice of action, but neither did I. I reacted in the only way I could then.

When I saw him at work again, for the first time in a long while I didn’t flinch inside. I didn’t feel angry at myself or him anymore.

I saw that he was still that charming individual that I first loved. Even though it was six months ago, and now that our parts in each other’s life are over, I genuinely wished him the best.

Without knowing it, I’d forgiven him and myself.

I guess I’d moved on.

It wrenches on the heart when things change, because whether it’s the love of a friend or lover, we offer ourselves with every coffee shared, every lingering gaze held.

We can’t take back what we offered. But maybe the point is learning not to want to, because those moments were beautiful.

Be brave. Be strong in loving and forgiving. Remember what you loved in that person who hurt you. Remember that everybody hurts. And know for a fact you are stronger, wiser, and more compassionate from your experiences.

Hong Rui is an aspiring illustrator who believes every breath can carry garlicky remnants of lunch and scrummy wafts of compassion. This article was written in inspiration by a song "The Marching Line" by Vanessa Carlton.

Redefining Closure in Order to Move On and Get Living Again