Dealing with a Relationship Crisis: How a Little Distance Can Bring You Closer
By Bettina Rae 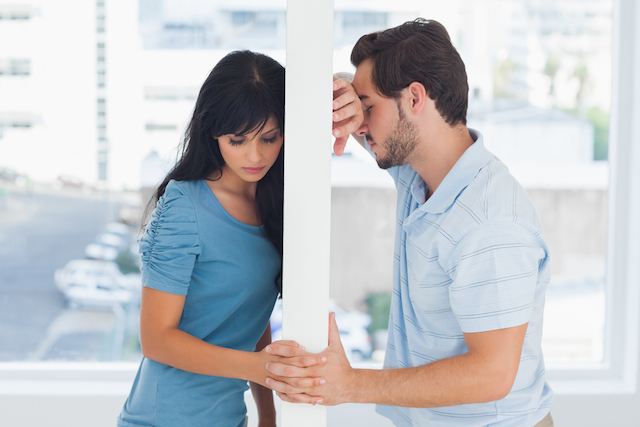 “Getting over a painful experience is much like crossing monkey bars. You have to let go at some point in order to go forward.” ~C.S. Lewis

When you’re in the middle of any sort of relationship crisis, the very last thing you want to do is let go. Conflict with someone you love often makes you want to do the very opposite, especially when the other person is already doubting the future of the relationship.

When we’re feeling threated by the loss of someone we love, we act from a place of fear. Our stress hormones sky rocket as we react with our fight or flight instinct. Suddenly we hold tighter, talk more, do more, and think of nothing else.

However, with a little space and hindsight, it is easy to see this sort of intensity around a negative situation only works to amplify the anger and resentment that both parties being feel.

When you are mid-crisis and fighting though, it is very hard to see that the very thing you are doing to try and resolve the situation is actually making everything far worse.

When I packed my toddler in the car and drove away from my husband six months ago, I fully believed I would not be returning. I honestly thought that if it had become so bad that we had to separate, that we would not ever reconcile our problems.

To my surprise, it was the act of letting go that allowed us both some space to re-evaluate our relationship, and helped us to finally realize that none of our disagreements were worth losing our family for.

Don’t get me wrong; I’m not saying that any of it was easy. It was ugly and dark and messy. It took us both to rock bottom, and to a place we never thought we’d come back from.

But it was this very darkness that forced us to focus on our own thoughts and actions rather than our external conflict with each other. Looking at ourselves was exactly what we needed to start viewing our arguments from each other’s perspective so we could finally move past them.

For me, the process of grieving the loss of what we had in our relationship shone a light on all of the things I had done to contribute to us falling apart.

At first, this was in an angry and disparaging way, but as I realized I had to start looking after myself in order to move forward, I saw the need to own my own part in what had happened, without negative judgment.

Realizing what I had done wrong was empowering. It gave me the opportunity to approach my partner in a new way. And it was clear from his response that he had been doing some very similar soul searching in the time he spent on his own.

When we started to reconnect, we came from a place of understanding and love, rather than resentment and hurt. As you can imagine, this drastically changed our interactions. And rather than spiralling into our past negative cycle, we were able to create new positive experiences to share.

Even now, this mindset is one that requires conscious effort to maintain. It’s too easy to get caught up in the negative annoyances that pop up when you are so close to someone, so we have to work hard to make sure we don’t allow ourselves to get stuck in that cycle again.

Especially when we’ve both hurt each other badly in the past, it would be all too easy to keep dragging that up with each petty argument that arises.

But we’ve both been to that dark place, and the feeling of losing something that we value so much remains a reminder of why we work so hard to maintain what we have. Why it is important to always speak from a place of love, not a place of hurt, annoyance, anger, or, the amplifier of all, exhaustion.

While the drastic step of separation is exactly what helped us reconnect, it didn’t need to go that far.

If only we’d had the awareness to step back from each other and view our relationship from a place of love, rather than fear, we may have been able to save ourselves the incredibly painful experience of letting go.

Instead of grasping, fighting, and reacting (all fear based responses) and focusing on our own pain, we might have been able to use love to see and understand the hurt that the other person was feeling.

Rather than continuing on our negative spiral of conflict, focusing only the wrongs that had been done to us, we needed to step back and be honest with ourselves about our own roles in the relationship conflict.

We both needed to realize that our own behavior is the only thing we can control, and it was our own actions that needed to change to move us to a better place.

Hindsight is a beautiful thing, isn’t it?

So, if you have been fighting and reacting from a place of fear in your relationship, try stepping back and giving yourself some space to look at the real issues.

Give yourself the distance you need to view the conflict from a place of love and give yourselves the chance to find your way back to each other, without having to let go.

Bettina Rae is a yoga teacher, Mama, creative and writer at Little Old Souls, a blog about Motherhood, Creativity, Wellbeing and finding that elusive balance. She also collaborates at The Kindred Collective, a community of and for Mothers.