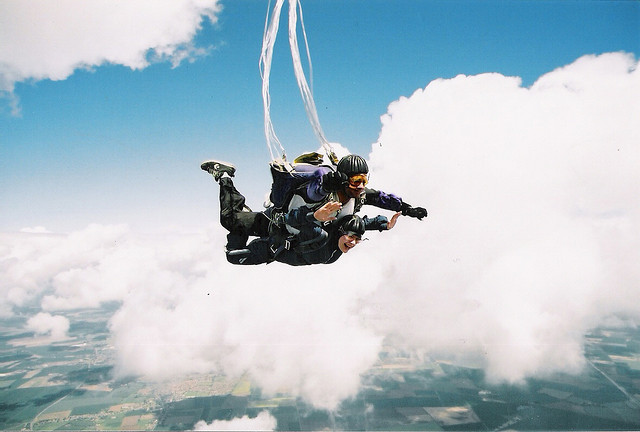 “Take that first step. Bravely overcoming one small fear gives you the courage to take on the next.” ~Daisaku Ikeda

When I was younger I loved to climb trees, but I was always too scared to get myself down. Somehow, when standing at the base of a massive Oak, I’d forget how terrified I’d feel at the top.

So I’d climb away, trying to prove to the neighborhood boys that I was fearless, and then stay up there, clutching the bark and crying, until someone helped me get safely to the ground.

I knew who I wanted to be—a daredevil Tomboy who was adventurous and tough—but I was deathly afraid of feeling out of control and getting hurt.

You can probably imagine how terrified I felt when I went skydiving several years ago. I would have sooner put hot pokers into my ocular cavities then let go and free fall from 10,000 feet in the sky.

It was a lot higher than the tree branches—making the rise to the top a lot more terrifying.

Still, I wanted to do it. I had a whole list of reasons:

It would have been easy to psych myself out of going. It was the scariest thing I’d ever done. I was overwhelmed with emotion, and even slightly paralyzed. It didn’t help matters that someone tweeted me a link to skydiving fatalities an hour before my boyfriend showed up.

In that moment, it seemed far more reasonable to back out. I knew it was unlikely I’d plummet to my death, but even the slightest risk seemed too big to take.

I realized the only way I’d follow through was to stop thinking and focus on doing. I had to start moving toward it, one inch at a time.

So I told myself that all I had to do was get in the car at 10:00 AM. At that moment, none of the other steps mattered. I didn’t have to deal with those fears right then; I just had to deal with the task in front of me.

I didn’t have to fill any of those moments with the fear of falling. I didn’t have to concern myself with how I’d feel in moments to come. I just had to be in the present, doing the simple tasks it required.

Eventually I got to the point when all I had to do was board the plane.

That’s when I started crying. Full on tears, on a second date, in front of a group of strangers who didn’t seem even slightly nervous.

Yes, I felt emotion. Yes, I expressed it visibly. No, it did not stop me. OK, it almost did.

After my boyfriend barreled out excitedly, like a kid doing a cannonball in a pool, my tandem diver pushed me to the open door. I could almost feel the bark under my fingernails as I clutched the sides for safety. That was the moment I hadn’t thought about through all the tiny steps that led me there.

The sheer terror I felt right then was what I had feared the most. I likely wouldn’t have gotten to that point if I’d started feeling it far sooner than necessary.

I’d focused on each tiny step until I got face-to-face with the most frightening one, and then, with nothing left to do, I took a deep breath and jumped—and landed, panting, laughing, crying, and feeling more alive than ever before.

This, I have realized, is one of the most effective ways to do anything that scares us: focus on one step at a time without dreading how we’ll feel later in the process.

If you put too much attention on things that could go wrong later, you limit your effectiveness right now. That’s not to say you shouldn’t plan to avoid potential problems. It’s just that if you function in a state of constant anxiety, it will eventually cripple you.

Whatever it is you want to do, it doesn’t need to be this massive, overwhelming goal. Instead, think of it as a series of steps, some simpler than others, and commit to completing some every day.

Absorb yourself completely in each phase of the process, giving them your full attention, as if nothing else matters but what you’re doing right now—as if showing up for each part of the journey is in itself the goal.

All that matters is that you take a step, and keep taking them, even if you don’t know where they’re leading.

Jumping into something new can be terrifying. You never know for certain where you’re going to land until you get there. And it’s hard to silence your fears about just where that may be.

It’s okay to feel scared. Just know it doesn’t have to control you—not if you choose to focus on where you are, and put your heart into the step of this moment.

For years I told myself I wasn’t who I wanted to be because I felt so scared. I’ve since realized it’s not my fear of falling that defines me. It’s the fact that I’m willing to make the climb in spite of all the feelings it brings up.

What small, manageable step can you take today toward that thing you want that scares you?