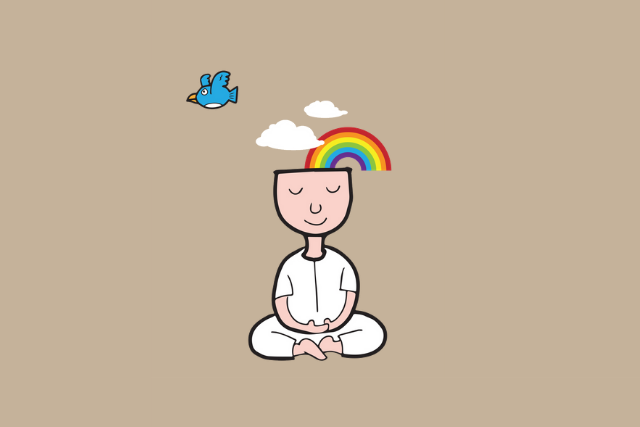 “While meditating we are simply seeing what the mind has been doing all along.” ~Allan Lokos

People around the globe have practiced meditation for centuries upon centuries, and it’s quickly becoming one of the most popular pastimes in the modern world. It’s one of the most effective ways to find inner peace, relax, and cope with stress.

I’ve had my share of stress and troubles over the years. I remember one time, nearly eight years ago, when the stress and anxiety really got to me and made my life miserable.

I was facing the prospect of being made redundant at work. The economy was in a bad way, money was tight, and my relationships were strained. I didn’t see any clear way out of the oncoming storm.

The darkness began to surround me. Depression hit, and I began taking tranquillizers. I didn’t feel like doing anything. I was apathetic and often vented my anger on those who were closest to me. On top of this, I treated my body poorly by eating junk food.

All this was affecting my health, as well as my performance at work and in life itself.

One day I decided that I could not live like that any longer. I had finally had enough.

How I Turned My Life Around

To begin with, I was open and honest with friends and family. I explained why I was so stressed and how poorly I was coping, and told them that I planned to change.

I told myself that everything would be fine, that these bad days wouldn’t last forever; it was just a temporary experience. And even if I lost my job, sooner or later I would find something else. It wouldn’t be the end of the world.

I joined a local gym and began exercising.

I’d exercise three or four times a week after work, would eat fresh and healthy meals, which I’d prepare for myself, and would work a little bit in the garden behind my house.

Work slowly began improving. I kept my job, and once again I felt pretty good.

At the gym one day, however, I got talking to a guy about general health, fitness, and positivity, and he recommended meditation.

I was sceptical at first. I thought meditation was something reserved for monks.

Nevertheless I decided to give it a go, and eventually incorporated it into my daily routine.

Meditation now comes as natural to me as brushing my teeth and showering in the morning.

I’d like to share a few of the fantastic benefits that I’ve experienced with meditation in the hopes that maybe you could experience them too.

As we leave our homes or belongings untidy and unmaintained for prolonged periods of time, they become dirty, grimy, dusty, and aren’t very pleasant to look at or be around.

Now, imagine your body as an untidy room or belonging. Instead of dirt, grime, and clutter, however, you experience anxiety, stress, depression, and negative thoughts.

We can pick these up from all sorts of locations, including things we see on TV or on the news, from people at work, from friends and family members, from stressful situations, and just about everywhere else in the world today.

Rather than stewing over these situations, surroundings, and people, meditation teaches us to simply release the negativity. It won’t remove those feelings, but it does give us tools to be able to cope with them in a more effective way.

The little things, even the larger things, don’t bother us as much, so we can remain positive, happy, tranquil, and peaceful within our self.

Rather than reacting to people and situations, you instead find yourself observing the world that is happening around you.

Before meditation, I would focus on the negative energy and allow it to overwhelm me. Thanks to meditation, I discovered something amazing: that there is perfection everywhere around us.

Instead of focusing on the negative, I found myself searching for the positive perfection in each moment. The faint smile from a stranger, the taste of my favorite meal, or even just the comfort of spending a few moments in quiet solitude all became more important to me once I could release the negative energy.

One great benefit of meditation is that it helps you vastly improve your concentration levels, which in turn will help make you far more productive.

When you meditate, you clear your mind of distractions and instead focus on the act of mediating itself. Then after meditation, you’re better able to focus on what’s right in front of you instead of getting caught up in your thoughts, fears, and worries.

4. You don’t find yourself bothered by smaller things.

Say, for example, you drop your dinner plate on the kitchen floor and have to then clean it up. Rather than shouting, swearing, and stewing over the fact that you made a small mess, meditation teaches us to not get bothered by smaller things.

Instead of feeling angry and sorry for ourselves, we simply grab a cloth and broom, clean up the mess, and get ourselves more food, without getting worked up about it.

Meditation teaches us to not sweat the small stuff, and helps to really put things into perspective.

There are people out there dealing with overwhelming problems. In the grand scheme of things, a little mess isn’t that big of a deal.

Another great benefit of meditation is that it helps us let go of anger more easily so we can forgive and forget.

When I was working abroad I fell ill and had to go back home earlier than I planned, so I took my payment and left.

What I didn’t realize was that I was entitled to a bonus for my work. It wasn’t much money, but still, it was something.

A few months later, I found out from a co-worker that “my good friend” had collected my bonus from my boss and did not give it to me when he came back home.

I was angry and disappointed, especially since we’ve known each other since kindergarten and I trusted him. It was months before I started talking to him again.

I’m not 100 percent sure how I would react to something like this today, but I’m fairly certain that I wouldn’t keep my anger bottled up inside of me, as it is self-destructive. With the peace I’ve fostered today, it likely would be far easier to let go.

6. You begin to feel more alive.

It might sound a little cheesy, but since I began meditating regularly, I’ve felt more alive than ever before.

It’s as if all of my senses have been awakened simultaneously. Images seem crisper. Flavors seem tastier. Joy seems happier (if that’s even possible).

I’ve found that I’m able to read people better, as well, both emotionally and physically. There’s this sense that allows me to detect if something is bothering someone or if they are having a brilliant day. It’s a beautiful experience that was entirely unexpected when I began my pursuit of meditation.

Above all else, I’m more self-aware. I know what works and what doesn’t work for me. I know how to get the best out of myself, productively and spiritually, and it’s all because I took up meditation thanks to a fateful conversation I had one day at the gym.

“Small shifts in your thinking, and small changes in your energy, can lead to massive alterations of your end result.” ~Kevin Michel

Luke Glowacki is an avid fan of meditation and contemplation. He also loves listening to binaural beats and isochronic tones as he believes that they have a positive influence on the brain and help one to achieve their full potential. He hosts a website at http://meditationbrainwaves.com where he writes about meditation, lucid dreaming, brainwave entrainment, brain waves and a lot more.