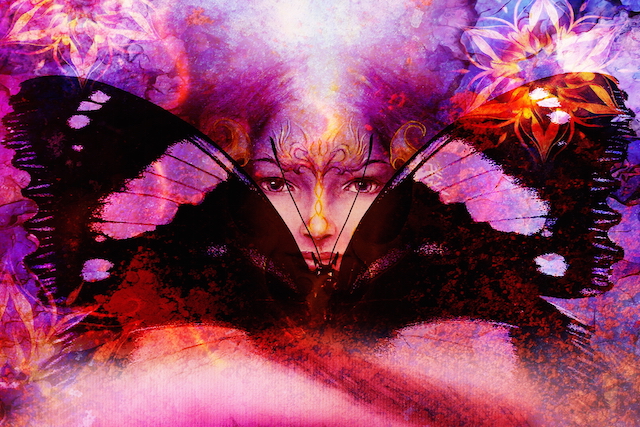 TRIGGER WARNING: This post deals with an account of abuse and may be triggering to some people.

“Hope is faith’s impoverished sister, but it’s a start.” ~Maureen Barberio, Gettin’ Out of Bullytown

My life wasn’t always easy. It’s not always easy now, as a matter of fact. But there was a very long period where it was quite difficult and painful. It is sad how many of us can say that, isn’t it?

I grew up in a dysfunctional home with two sisters. My father was an alcoholic and was physically and verbally abusive. My mother, herself a victim of my father’s verbal abuse, was very loving and complimentary but could do little about my father’s behavior. My mother, sisters, and I have always been very close.

Each time I was yelled at, and with each blow I received, a little bit of my spirit was broken.

Instead of gaining confidence during my grade school years, so I could enter the teen years ready to face the hormonal changes and roller coaster of emotions that go along with them, I went into the teen years feeling unworthy of anything good. I looked at my sisters and saw such beauty in them. I looked in the mirror and saw nothing but flaws.

In addition, I had done what so many children do: I assumed all blame for the abuse my father was heaping on me. I continued to look up to both my parents, as impossible as that may sound, and I took to heart every word spoken about me.

While other girls in high school got prettier and prettier, while my sisters became prettier in my eyes, I viewed myself as less and less attractive. I watched the excitement others had about boys and dating, and I knew in my heart I would never have those things. I’d never fit in. I was different. I was unworthy.

There’s nothing like leaving a house of sadness on a sunny day, unable to enjoy the beauty of nature because your heart is so heavy that you want to die. There’s nothing like going to school and seeing how carefree your friends are, all laughing and having a great time, and joining in with them even though inside you feel like a piece of garbage who shouldn’t even have friends.

I felt phony because I had so many secrets, not the least of which was my unworthiness, which they either didn’t see or they recognized but never mentioned out of pity for me.

Even the most confident girls struggle in high school with all the changes they’re faced with. Imagine going into it convinced you’re nothing but a hideous thorn in everyone’s side. Those high school years magnify the negatives, but with the help of a loving, supportive family, young women come out of them feeling good about themselves and their future. I came out of those years just feeling worse about myself.

By the time I hit my late teens I was convinced I would never have what ‘normal’ people have in the way of a life where there’s a man who cares about you and you plan for the future and build a life together.

I was living in emotional pain, and to lessen that pain, I began drinking and using drugs. I wasn’t resorting to these things all the time, but I was using them as tools to help me instead of seeing the root of my problems and pain.

In my early twenties, I met a man I thought was simply wonderful. The attention felt incredible. I started feeling better about myself. He loved me! This was as close to feeling loved and carefree as I had ever felt before, and it was so different that I embraced it.

Six months after meeting, we began living together and then married when I was twenty-six, despite the fact that by that point he was drinking heavily and doing a lot of drugs. I guess it didn’t matter to me, because I was doing the same.

Somewhere along the way, he began being very critical of me, so I found myself on the receiving end of verbal abuse once again. I tried harder to please him, as I had spent my childhood and teen years trying to please my father while always missing the mark. The little bit of my spirit that remained was constantly chipped away.

To cope with the reality of increased disappointment and anger on the part of my husband, I went through periods of abusing drugs. During other points in our marriage I decided to live without taking substances, but my husband would push me to join him, and to keep the peace, I did.

Even though I was a fully functioning adult, had jobs and attended college, I spent more than twenty years in a verbally abusive, alcohol and drug-fueled marriage.

Each morning I’d wake up and tell myself I wasn’t going to drink or do any drugs, and each day that I failed I grew more and more disappointed in myself. I felt such intense shame about who I was and how I was living that it was difficult to even think about. I spent much time feeling depressed in a place of darkness.

Growing tired of our lifestyle, we eventually stopped drinking and taking drugs and discovered we had nothing in common. The verbal and emotional abuse continued. So at the age of forty-five, I moved out of our home into another property we owned. I had no faith that my life would ever be better, but I hoped it would, and as the quote above states, that’s a start.

There is something that is so satisfying about seeing a neglected garden of weeds and taking steps to clear them out to see what you can grow. Or watching a caterpillar move through various stages until a beautiful butterfly emerges.

There were many uncertainties I was facing, but I decided that the Universe gives us each a garden—our lives—and it’s up to us to tend to that garden to see what beautiful things we can grow. Each of us is a beautiful butterfly, and sometimes we must let ourselves go through the process of getting rid of a hard shell in order to emerge as our true, beautiful selves.

I was uncertain about who I was, what I wanted to do next, and had a million questions that couldn’t be answered. At the urging of a friend who had mentioned it numerous times, I finally gave in when she once again said, “Why don’t you try Centers for Spiritual Living? I think if you go it will help you.”

And so I went. As soon as I walked in the door I felt like I was home. I actually felt something within me that was so moved on an emotional level that I cried.

A wonderful speaker talked about gratitude and challenged us to spend forty days writing down everything we were grateful for, an exercise meant to shift our focus and put it on the good instead of what we felt was lacking in our lives. The Minister handed out a journal to each of us, and the person who walked out of the church that day wasn’t quite the same as the one who had walked in.

Sometimes I would close my journal and notice I’d spent thirty minutes writing and it felt like it was only five minutes. The floodgates would just open and I’d get lost in thinking about how wonderful my life had become. One more thing for which to be grateful!

I so loved this exercise that I did it for a second time once the forty-day challenge was up. What happened after that was nothing short of astounding. I became more interested in the spiritual aspect of life, and filled with a bit more confidence, signed up for A Course in Miracles. I was starving for this kind of information, which seemed to fill me up!

I began getting out more. I signed up for a couple of classes at the local university, in order to complete my studies and get a degree. I continued the practice of writing down the things for which I was grateful, only now it didn’t take five, ten, or fifteen minutes before I could think of something, I was already coming up with things while I was still reaching for my notepad and pen. I still found the flow to be the same though. I’d write down one thing, which would lead to another and another.

I continued spending time at the Center, signing up for classes, and reading books to be discussed. It was a whole new world I was being exposed to.

I met a wonderful man and got married. I started my own business, and I love the work I do.

As I continued my spiritual studies and practice of gratitude, I came to be blessed more and more. I became a licensed Practitioner at our local Center for Spiritual Living, started a second business, and have become even closer to my two wonderful sisters, enjoying my time with them laughing and joking as though we’re three little girls.

My life looks nothing like the life I lived until I was in my late forties, and yet, I’m grateful for that earlier life because the pain of it has led me to so many wonderful places. My heart and spirit have healed, and I am committed to spreading the word about the blessings you will receive through the daily practice of gratitude.

This doesn’t mean my life is perfect, or without worry, or even absent from the occasional feelings of guilt or shame about something, but I am able to quickly deal with those feelings and put my focus back on the things for which I am grateful. And that has made all the difference in the world.

Can you relate? Just for today, write down some things you feel grateful for. There are plenty of things. Just look out the window, go for a walk, and you’ll find them. Keep doing that each day and make it a habit.

Think of some things you’ve always wanted to do but didn’t pursue because of fear, shame, lack of confidence, etc., and commit to doing just one of those things. Baby steps. That’s all it takes.

And when you start feeling down or worried, open up your journal and read through your lists. It will move the focus from the negatives to the positives. You’ll find that writing about gratitude will lead to feeling more positive about your life, prompting you to take action that brings positive results—and even more blessings and opportunities. I’ve noticed this snowball effect in many lives, starting with my own.

As I live a life that consists of gratitude, I see where every negative experience has molded me, taught me, made me compassionate, and led me to be the wonderful and best version of me that I can be today.

Isn’t that a blessing?

Deborah Perdue, author of the beautiful Grace of Gratitude Journal, and four other gratitude books, loves to share the powerful practice of gratitude. She teaches workshops and classes and is an award-winning book designer. You can find her blogs here and listen to her talk on the same subject here. You can sign up for free daily Gratitude Reflection emails on the home page at graceofgratitude.com.