Tiny Wisdom: Choose to Be a Hero
By Lori Deschene

“A hero is a man who does what he can.” -Romain Rolland

Two weeks ago, a group of brave bystanders in Utah banded together to lift a burning car and save a man trapped beneath it.

In 2009, a passenger on Northwest Flight 253 leapt onto a burning man to prevent him from detonating an explosive device on Christmas Day.

Four years ago, a 50-year old man threw himself onto the subway tracks in Manhattan, just as a train was arriving, to save a man who had fallen after having a seizure.

These men and women all had one thing in common: they were ordinary people, just like you and me, and they decided in an instant to do something heroic.

According to renowned psychologist Dr. Phil Zimbardo, famous for his Stanford prison experiment, we can all be heroes—and it doesn’t require us to put our lives at risk.

Dr. Zimbardo has dedicated his career to studying the darker side of human nature to understand what causes some people to act kindly and others to act cruelly. His research has revealed that we all have the potential for good and bad, and it’s largely influenced by our situations.

So what exactly makes a hero? Simply put, a hero is someone who chooses not to watch and wait in the face of a crisis.

A hero puts compassion into action by helping someone in need—whether it’s a friend or a stranger.

A hero decides to speak out against injustice, instead of assuming someone else will do it.

A hero supports the causes that matter to him or her, without expecting reward.

It’s easy to feel powerless when it comes to righting the biggest wrongs in our world. But stronger than our fear that we can’t make a difference is our instinct to try.

Today I commit to doing what I can—being there for those who need me, standing up for what I believe in, and choosing not to ignore my instincts when I feel that something isn’t right.

How will you be a hero? 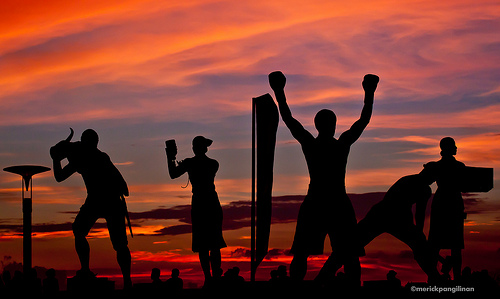