How Mindfulness Is Saving My Relationship
By Sandy Woznicki 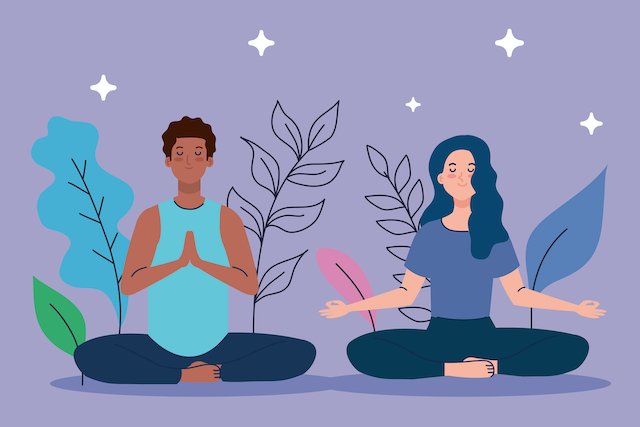 “Mindfulness is about love and loving life. When you cultivate this love, it gives you clarity and compassion for life, and your actions happen in accordance with that.” ~Jon Kabat-Zinn

I started meditating and practicing mindfulness more seriously several years ago incorporating it in to my daily routine, initially to help with my anxiety. My practice certainly helped me by leaps and bounds in overcoming my anxiety, but an unexpected side effect has been the impact it’s having on my marriage.

We’ve not been married long, and as many couples before us have experienced, getting accustomed to this new dynamic can be at times… difficult.

Learning to communicate and compromise isn’t always a smooth ride. He cares about being on time (or early), I care about not being rushed. I like the kitchen cleaned after dinner, he couldn’t care less. He gets stressed when he doesn’t know the schedule in advance, I feel stressed when I feel boxed into a plan.

So we argued. And got mad at each other. And created these expectations for each other that we definitely didn’t always meet.

But slowly I started to notice a change. It began with a change in me, my stress level, my tendency to blame, my expectations of him. I found myself more understanding, better able to let go of things that didn’t go my way, and better at communicating when an argument bubbled up between us.

Then my husband started to change too. He’d noticed the changes in me and saw how much better I felt and how much easier communication was with me, and he started mimicking what he saw me do.

He wasn’t letting things bother him as much. In a situation where we would have had an ugly argument, he was now starting the conversation from a place of curiosity instead of finger pointing. But the biggest thing that I noticed from him was how he was willing and able to reflect on how he was feeling and dig into why he felt the way he did whereas in the past he would have become angry at me for making him feel that way.

Mindfulness is paying attention to the present moment on purpose and without judgment. This can be done in day-to-day activities like driving, eating, and in conversation. It can also be practiced as formal meditation.

This simple practice can transform our relationship with our thoughts, give us new perspectives on life and even our own behaviors, and free us from the hold that our emotions can have on us when we identify with them.

Here are changes I’ve seen in myself from practicing mindfulness that have led to improving my marriage.

Stress is a salty mistress with eight in ten adults suffering daily. And anxiety is pervasive in our society, affecting roughly forty million Americans (including me for thirty-ish years). Practicing mindfulness is a time-tested and scientifically proven method of dealing with and overcoming the hold of stress and anxiety.

When we’re stressed, feeling down or angry, we’re on the lookout for anything to prove that life is stressful or crappy, or that we’re right and others are wrong. We notice the things that bother us like dishes left on the counter, a car driving too slowly in traffic, or the way your spouse asks what’s for dinner.

And when we’re happy, we do the same—look for things to prove why life is great. You notice the nice things, the birds chirping, that your spouse gets up without complaint on Tuesday mornings to take out the trash. It’s also easier to be more compassionate and forgiving from a happy place.

The less-stressed and no longer anxiety-ridden me is a much better wife and partner. From a happier place, I’m not only much more pleasant to be around, but things don’t tend to bother me as much.

As a person with ADD, I’ve always found listening intently in conversations to be a difficult task. The mind wanders to other topics making it difficult to be fully present, take in what the other person is saying, and retain the information for later.

My mindfulness practice has drastically improved my ability to pay attention. It’s like brain training, building the ‘muscle’ that helps direct our attention at will.

I’m better able to fully listen to my husband when he’s sharing with me without always thinking of what I’m going to say next or what I need to do later. He feels heard, and we feel more connected to each other as a result.

I’m much more aware of how I’m feeling.

Not to say that I’m happy 24/7—I don’t think that’s possible, nor would I want that. We have a rainbow of emotions, and there are good reasons to feel them even for a brief moment.

The act of paying attention on purpose trains the brain to notice what we’re feeling. We’re so used to just feeling our feelings, and if they’re not pleasant we either try to run from them, numb them, or lash out.

It’s more productive and much less stressful to look at our emotions with curiosity. Label them. Then ask questions. “Ah, I’m feeling irritated. What’s that about? What’s another way of looking at this? How can I change this situation or cope with it?”

I’m also better able to catch myself before emotions spike high. Once emotions hit their peak in an argument, the horse had already left the stable. It’s tough, if not damn near impossible to reel it back in once you’ve reached the crest of pissed off-ness.

At this point, your brain and body are in fight-or-flight mode where it’s impossible to access critical thinking skills and takes about twenty minutes to calm enough to think clearly to make sound, logical decisions.

Granted, those high negative emotions are drastically fewer and further between for me now with years of mindfulness practice under my belt. However, I’m only human and once in a great while I can feel those emotions rising.

Being more aware of how I feel has helped me resolve difficult or frustrating feelings internally and avoid arguments with my husband.

I’m much more aware of how my husband is feeling.

Mindfulness practice increases your ability to be present, and thus not be distracted by thoughts. As a result, you become more insightful, a better listener, and more observant.

This results in higher levels of emotional intelligence because you are able to see things from another person’s point of view to facilitate better communication. It becomes a powerful tool that makes you more effective in understanding other people, as well as contexts and situations.

When my husband seems upset, I’m better now at putting his behavior into context and empathizing with his emotions. For example, an angry outburst from him directed at me because we should have left five minutes ago, I can see is actually his frustration stemming from a lack of control over something he values—which is punctuality.

I don’t get upset in return anymore. Instead, I empathize with him because I better understand what is causing his emotions and don’t take them personally.

Pobody’s nerfect. Mindfulness teaches us to forgive ourselves and others as we are paying attention to the present moment non-judgmentally.

Using mindfulness techniques, a person is able to let go of or forget about the past and not dwell on what the future can be.

Mindfulness can be highly beneficial because we are able to let go of unrealistic or materialistic thoughts and just exist in the moment.

It can be used to accept the feelings of sadness, anger, irritation, or betrayal that you have and to move on from them. Your path to a freer you, begins with knowing what is hurting you the most.

Cultivating a greater capacity for forgiveness has brought me to a place in my relationships where I don’t hold grudges or dig up the past in arguments.

I’m aware of the stories I’m telling myself.

When something doesn’t go our way, it’s so easy to identify with the story we’re telling ourselves and label it as the whole truth.

Mindfulness has shown me the difference between me and my thoughts. They are not one in the same. Thoughts are ideas passing through our minds like clouds in the sky. They are fleeting. They change with context.

Because of mindfulness, when I’m upset I can more easily identify the story I’m telling myself that is making me upset.

For example, I was hurt after my husband didn’t get up and greet me enthusiastically when I came home from a week-long business trip. He stayed sitting on the couch absorbed with what he was doing.

I was upset and went upstairs to fume. Then I realized I was telling myself a story that my husband doesn’t care about me or love me enough. I know that isn’t true. There are a number of reasons why he didn’t get up.

When I came back downstairs he could tell I was still a bit upset, so he asked me about it. I said, “The story I’m telling myself is that you didn’t miss me because you didn’t get up when I came home. I know it’s not true, but I’m still feeling a little upset because I would have liked it if you gave me a big hug.”

He apologized and said he’d wanted to wait until I was settled to love on me. He was much more receptive to “the story I’m telling myself” than he would have been had I started in on him about what he’d done wrong. And I felt better when I stopped jumping to the wrong conclusion and allowed him to share his side while avoiding confrontation.

That’s when I knew our relationship was improving because of mindfulness.

Being able to objectively look at my thoughts and feelings allows me to reframe any situation and gives me the space to respond thoughtfully instead of reacting impulsively.

If there’s one thing I’ve learned from this experience it’s that self-love and striving for self-improvement can have a ripple effect through your life affecting those around you for the better. The better me I can become—less stressed, more compassionate, healthier, happier—the better wife, friend, daughter, and coach I can be.

Sandy is a stress and anxiety coach and founder of Graceful Resilience helping compassionate women who deep down don't feel good enough and are overrun by stress or fear. Her coaching and free resources like The 3 {Must Have} Habits to Stop Stressing help women to take control of their lives to live more fully and freely. She’s happily married to her goofy husband and loves connecting with nature in beautiful Maine.