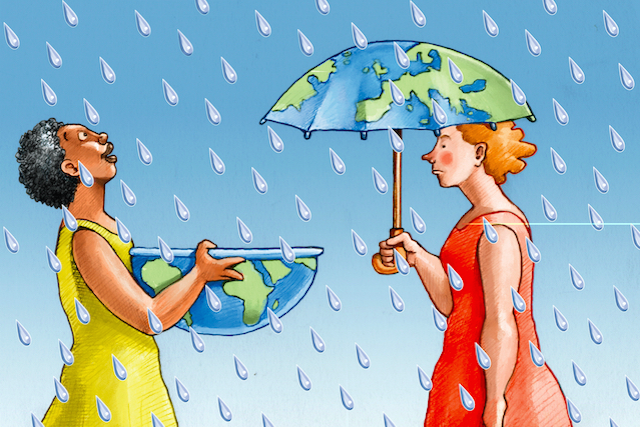 “Most disagreements are caused by different perceptions that created different realities.” ~Unknown

When I was thirteen, I experienced a monumental change in my young life.

It wasn’t a big move, no one close to me died, and although puberty was rocking my world in the worst way, it was something else altogether that shook me to the core:

The movie Titanic came out.

I know, I know, it’s just a movie, and I was just another swooning teenager wishing that I was the one Jack never wanted to let go of, but it hit me hard. Truth, love, the pain of loss: a woman following her heart and risking it all for true love. I relished every second of its three hours and fifteen minute run time.

So much that I saw it multiple times over winter break at school—usually with my equally enamored mom, sometimes with my best friend, always with a lump in my throat. I held back tears as I saw Jack’s face disappearing into the icy waters, always wondering why Rose couldn’t make room for him on the raft, each time imagining myself in the situation: falling in love, making tough choices, persevering through loss.

Returning to school a few weeks later, I knew I’d been changed. Titanic was helping me to sort out the girl I was from the woman I was becoming, and I figured it was having an equal effect on those around me. I was pleasantly surprised when I walked into class on the first day back at school and read an obviously related quote on the white board:

I smiled inside, realizing that my eighth grade teacher must have seen Titanic too, feeling a kindred recognition of just how important this epic film was. After all, it was a sweeping success across the country, breaking records and hearts and box office sales.

As I settled into my seat and he began to lecture, I prepared to listen to what his thoughts were about the film: maybe he had a historical critique, or an interpretation of the film’s depiction of the human condition?

Oh, how wrong I was.

It turns out that the local football team had gone to the super bowl during this same break, and while I was losing it over Jack and Rose, many others were losing it over this team’s big loss.

As my teacher began to lecture and joke with classmates about “the value of making it to the super bowl at all” I hung my head in frustration and confusion. There was a life-changing movie in theatres, cataloguing one of the worst catastrophes in history. Why didn’t anyone care about this? Isn’t this quote on the board far more applicable to a love story than to a football team?

Doesn’t everyone feel the way that I do??

In retrospect, my Titanic example is funny (and somewhat ridiculous). Of course not everyone felt the same soul shaking connection to a movie, and of course not everyone had the newly awakened hormones of a teenage girl. (Say Leeeeoooo with some longing in a whispery voice, and you’ve got my thirteen-year-old daydreams pegged pretty well.)

When we’re that young it’s easy to make major mistakes in our perception of others, but within this comical event are the seeds of an issue that would continue to show up, both in my life and others.

My misinterpretation of a teacher’s quote on the board is an early mistake in “encoding” and “decoding.” Those two words are just fancy talk for the complicated interaction that is communication, and how they’re related to something called the “confirmation bias.”

See, when I read those words on the white board, they confirmed something that I (unconsciously) assumed to be true: everyone cared about this thing that I did (ahem, Titanic, cough) and of course this quote about love must relate to it. The words on the board spoke to me in a way that I thought was universal: my thirteen-year-old brain knew exactly what they meant.

When words are spoken, however (or written on a white board in eighth grade), the intention of the communicator can get lost in the understanding. When I say something to you, I’m “encoding” information that I want to communicate; I’m trying to get you to understand me.

See, this variability in perception happens because each of us views the world through a slightly different lens. What the word “love” means to me could be different than what it means to you; for example, what has the word “love” meant in the past? Has it been controlling or unconditional, loaded with expectations or adoration?

The actual words we use are simply a jumping off place, and then they’re strung together in beads of sentences that can appear a different color to each person listening. The “colors” (or meaning) we assign to words vary because all of us do; and because our minds are expert categorizers, we often understand things in a way that already makes sense with our existent worldview.

It’s for this reason that two people can read the same news article and come away with different interpretations, or feel entirely different about the events going on in the world: We tend to pay attention to information that confirms what we already believe to be true, and disregard the rest of what we see. It’s not due to callousness either; it’s the way that we’re wired.

Our brains are really good at simplifying and organizing. In order to cognitively make sense of a complicated and busy world, we have to become expert categorizers. This is adaptive, and it helps our overworked brains make sense of things.

The hiccups only come when we forget that the way we’ve organized the world is different than the way that others have; when we assume that each person interprets the world and its events the way that we do.

So, what do we do? If everyone could mean something different when they say “I love you” or “let’s go get some ice cream” then how on earth are we ever supposed to understand each other? Is all social coherence lost?

The answer is simple, but not easy: We must keep an open (and present) mind.

Keeping an open mind is realizing that we all perceive the world that we live in differently. It’s remembering that when we read (or listen) we are “decoding” at the same time—trying to understand and make sense of information, all through our unique and limited worldview.

It’s being patient when we feel misunderstood, and allowing for the possibility that we’re also misunderstanding others.

Open-mindedness is being forgiving of people who hold different opinions and reminding ourselves that we’ve really only ever been one person; we don’t necessarily know what the world is like for others.

Being open-minded is another form of mindfulness, really. It’s pausing before responding, and asking ourselves: What do I already believe to be true about this person, this event, this political party? What in my past is causing me to feel agitated, or generous, or suspicious? What does the person speaking to me actually mean?

Even if we don’t always have the answers, simply allowing the questions to percolate our perception can open us up to the world around us.

Not having answers also gives us the chance to ask questions; if we don’t know what someone means by a statement, we can ask them to clarify. If that’s not an option (because who likes to feed trolls on the internet, right?) then can we at least hold space for a worldview that varies from ours?

Even if we don’t agree with it, even if it makes our blood boil, can we pause while we try to understand it? Slow down our categorizing minds and realize that the world looks different from varying angles?

It’s difficult to pause when we’re agitated, but it’s definitely possible. Practicing mindfulness in communication (whether it’s with a loved one or a stranger on the internet) can give us space to ask these questions, extend our understanding, and allow for differences.

Listening to an idea with an open mind is letting go of all the reasons it’s wrong, or right, and allowing the person (or words) to be what they are. It’s digesting things with the knowledge that we’re bringing our own “stuff” to the table; keeping in mind that our history colors each and every interaction we have.

It’s a complicated world that we navigate, and there are benefits to the assumptions we jump to minute by minute. But in order to sift through assumptions we’ve first got to be aware of them, and that involves being vigilant of our monkey minds as often as possible. It involves pausing, taking a breath, and asking ourselves: Is this person talking about Titanic, or football?