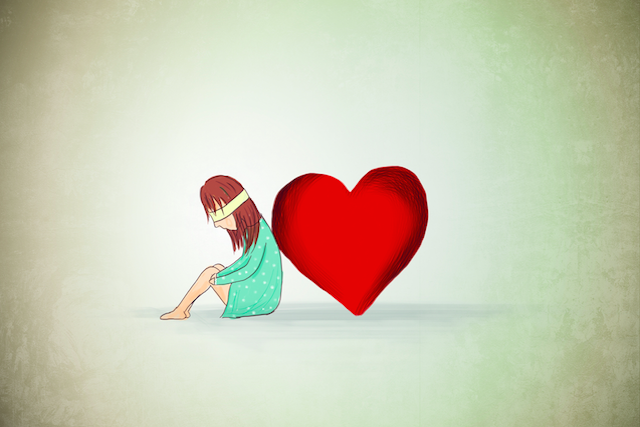 “Forgiveness is just another name for freedom.” ~Byron Katie

Aside from the fact that I was born on Groundhog Day, I didn’t know why I kept falling into the same relationship patterns, which inevitably led to heart-crushing breakups.

I knew that I had a deep capacity to love, or so I thought, but it somehow wasn’t enough. I always ended up either feeling taken for granted or fighting desperately for my partner’s attention after the initial attraction phase wore off.

I couldn’t help becoming someone else, someone I thought I needed to be in order to avoid being abandoned. This, of course, backfired, because it further lowered my self-esteem and caused me become even clingier and more neurotic.

It was hard to not get down on myself for who I became in relationships. I didn’t know how to process the end of a relationship or how to separate what was my partner’s emotional stuff and what was mine, so I walked into the next relationship with accumulated anger, resentments, and taller walls around my heart.

It was easier to blame the guy for being emotionally unavailable, withdrawn, selfish, and all the other names I called him. This went on for over a decade.

Still, somehow my divorce was peaceful, and at times I even called my ex-husband in despair after a breakup, crying, “He doesn’t want me anymore.”

He’d jokingly say, “Well, you shouldn’t have divorced me.”

I knew what he meant. And I knew why I called him. It was the only relationship that didn’t blow up in my face at the end. I needed to see that I wasn’t a complete and utter mess and that I had something good to offer in a relationship, even if it didn’t last forever. We were able to remain friends who talked a few times a year.

After my third heartbreak, I knew that something had to give. I became very depressed and lost hope for being able to have a happy relationship that didn’t end in divorce or a dramatic breakup.

I kept asking the Universe, “Why am I not healing? What is wrong with me? Why do I end up falling in love with unavailable men and then clinging onto them for dear life?”

I prayed all day, every day. My hope was eroding fast and my self-rejection was growing by leaps and bounds.

The answer came in the form of one word: forgiveness.

To be honest, I was not interested in forgiving anything or anyone. I wouldn’t even know where to begin or who to forgive. Instead, I just added more toxicity to my pain by letting resentments turn to hate. This gave me a false sense of power and the illusion of protection from further pain, disappointment, deception, and betrayal. I felt like I’d had enough of all of these.

In my mind, forgiveness meant that I would die without receiving compensation for the ways I’d been wronged. That was just not okay.

I sat on my throne of righteous indignation for a few more weeks. In the meantime, I was twisted up in knots over the guilt I felt from having hurt all my partners, which I didn’t know what to do with either.

I wrote an email to my last boyfriend, which he didn’t respond to. That hurt even more. I got to feel what it’s like to not be forgiven for the mistakes you’ve made.

Non-forgiveness may feel like power and protection, but it ends up becoming a lonely, self-made prison cell. At that point, I knew that I was creating more unhappiness and loneliness for myself.

I finally gave in. Even though it took weeks for my ego to calm down and open to the idea of looking at who and what I needed to forgive, the thought alone started to make me feel lighter.

Since my biggest pain revolved around men, I started with my father.

In my last three relationships, I had relived the trauma I’d experienced with my dad.

My father loved his younger sister more than any of us and was never shy about expressing it. As a little girl, I watched my father adore my aunt in ways I longed to be adored by him. She was a grown woman, only eight years younger than him, but he treated her like his beloved little girl he would bend over backward to please.

What I got was mostly scolding, angry, disapproving eyes from him. I knew that he was capable of offering love to someone, but that someone was not me. My aunt had already filled that spot before I was born (not her fault) and there was nothing I could do to be daddy’s little girl.

I felt helpless. He was the only father I had, and I was too young to seek other solutions.

Of course, the men I fell in love with played this part really well: They all had a former lover they couldn’t get over, they had a wandering eye that left me feeling as if I weren’t enough for them, or they were burned out from showering their former partners with adoration and getting hurt in the end.

They were wounded by those partners (and possibly their own mothers), so they either didn’t know how to connect intimately with a woman and commit to her, or they were too burned to risk going there again. Regardless, I was getting the short end of the stick despite how much I loved them.

As I wrote my story, I started seeing the threads. I prayed for this pattern to be healed and lifted up from my consciousness, burned the pages along with it, and let go of the outcome.

I waited for the process to start working and watched for signs. Nothing seemed different for a while. I was still grieving and feeling remorse for my own mistakes.

Then I realized that I had to process my “love story” from the vantage point of my former lovers and forgive myself as well. The other side of the non-forgiveness medal was guilt. Both were toxic and blocks to my happiness.

So I wrote about my mistakes and again asked the Universe to give me a clean slate. At this point, knowing that there was nothing I could do, I put all my focus on caring for myself and making plans to achieve my goals. I wasn’t in charge of the Universe and couldn’t dictate when the healing was supposed to come.

A few days later my last partner called and said that he wanted to have a heart-to-heart conversation with me. I didn’t know whether he wanted to yell at me or talk about patching things up, but I agreed to meet. I had nothing to lose.

I called a good friend and told him what had happened and all about my forgiveness process. As I was telling him the story, it felt as if the person who was talking was not me. My words were softer; there wasn’t a trace of anger or blame left in them.

I heard myself say, “It’s no one’s fault, you know. We are all trying to find healing. Even my father. He didn’t know how to be with his daughter. His relationship with my aunt was safe. For some reason it was in the cards for me to experience that neglect so I could use it for something greater.”

In that moment I felt my heart open. I saw the walls around my heart melt away in my mind’s eye. He was quiet for the longest minute. Then he said, “Banu, this is the most loving thing I have ever heard you say. I am speechless.”

I can’t explain what a miracle is, but I now know they exist.

My former partner and I had our talk, and I was able to hear his side without getting defensive or attacking back. I was no longer looking at him and seeing my dad. I could just see Jim as Jim, as the man I love and as someone whose healing I could contribute to by giving him the gift of seeing who he truly is.

After our talk, as we started spending time together, I found myself actually seeing him for the first time. He was freed from the role he had to play for me in order to get to this place of forgiveness. He was free to be himself.

The future of us? Who knows? We decided to take it one day at a time and rebuild trust. I no longer feel the need to make him do or be anything.

My heart is at peace knowing that I now have something more to offer in a relationship than my projections and resentments from the past, which have nothing to do with the person I am relating to. I have to tell you, I feel like a new person.

Your pain served a purpose and brought you to this place where you can also recognize your own patterns, if you’re willing to look for them. In a way, those unhealthy relationships were gifts because they provided clues as to what needs healing in your life. So give forgiveness a chance. That is the only way to wipe your slate clean.

Recognize that we are all perfectly imperfect—we’re all working through our own patterns and trying to heal our pain—and that forgiveness is the biggest gift you can give yourself and anyone. I hope that you can have this. You are worth it.

Banu is an intuitive coach and a healer. Her passion is removing emotional, mental, and energetic splinters that create blocks to joy. You can connect with her on her website and her budding Facebook group Heart Alchemy Crusaders.