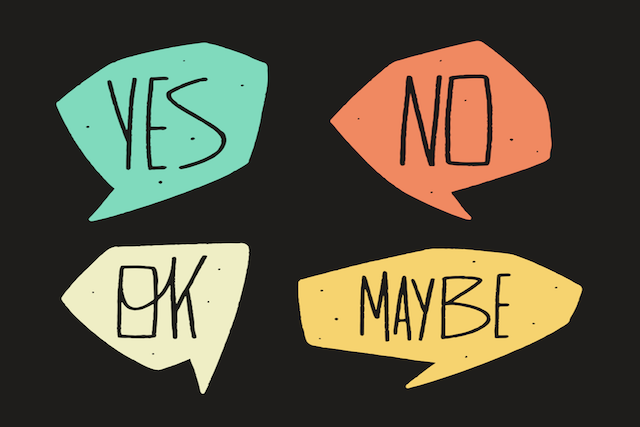 “Live your life for you not for anyone else. Don’t let the fear of being judged, rejected or disliked stop you from being yourself” ~Sonya Parker

I am a sucker for saying yes.

Sometimes I even find myself thinking “no, no, no, no” and then I blurt out “yes.”

Why is it so difficult to say the word “no”? It’s just a word, right?

After feeling trapped for some time by my excessive urge to be agreeable, it got me thinking.

I asked myself why it was so important for me to please everyone, to the point that I would feel resentful and stressed because of it.

I realized I was afraid of saying no because my biggest fear is rejection. I was afraid that every time I did this, I would disappoint someone, make them angry, hurt their feelings, or appear unkind or rude.

Having people think negatively of me is the ultimate rejection. Whether they say what they think of me, out loud or not, does not matter to me. It is the thought that they look down on me.

And so I realized exactly why I found it so difficult to say no.

I realize this is not just a challenge that I face, but one that many people go through every day. It’s a heavy burden to carry because with the urge to say yes also comes a lack of self-confidence and self-value.

If, like me, you’re having trouble saying no, this may help.

Saying no doesn’t mean that you are being rude, selfish, or unkind. These are all unhelpful beliefs that make it hard to say no.

Learning where these beliefs have come from is a great way to learn to let go of them.

Did you ever wonder why it was so easy to say no when you were a little kid and why it has become so difficult now? What happened?

Well, as children, we learned that saying no was impolite or inappropriate.

If you said no to your mom, dad, teacher, uncle, grandparents, and so on, you were most certainly considered to be being rude, and you would have probably been told off for it.

Saying no was off limits, and yes was the polite and likable thing to say.

Now that we are all adults, we are more mature and capable of making our own choices, as well as knowing the difference between wrong and right. Therefore, no shouldn’t be an off limits word, but rather something that we decide on ourselves, based on our own discretion.

But sadly, we hold onto our childhood beliefs and we continue to associate no with being dislikeable, bad-mannered, unkind, or selfish. We worry that if we say no, we will feel humiliated, guilty, or ashamed, and will end up being alone, rejected, or abandoned.

The second step to learning to say no is realizing that you are valuable and choosing your own opinion about yourself over others.

I have learned that if you live your life depending on other people’s approval, you will never feel free and truly happy.

If you depend on other people’s approval, what you are basically saying is “Their opinion of me is more important than my opinion about myself.”

If your opinion of yourself is actually quite low, remember that:

Is It Really Worth It?

The third step to learning to say no is deciding if saying yes is really worth it.

After committing to something, doubt eventually sets in and you may begin to think of ways you can get out of it.

And if you don’t have any good excuses, you then have to decide if you are going to tell the truth or come up with a lie.

Think about the anguish, stress, and resentment that saying yes has caused you. Wouldn’t it be so much easier and straightforward to just say no in the first place?

I remember this one time that I said yes to something and then later felt so bad about it that I ended up lying my way out of it. I still feel bad that I lied.

My boss called me one day and was asked if I could work the following Saturday. As usual, I blurted out a polite “Yes, of course, that’s no problem at all.” I actually had plans with my boyfriend, which I was really looking forward to.

Later, I found myself feeling absolutely terrible about having said yes and I wished that I had just had the guts to say no from the beginning.

Dreading the idea of having to work that day, I called my boss back with the best excuse I could think of. I told her that I had completely forgotten that it was my dad’s birthday that Saturday and that we had a family get-together (which was certainly not the case).

Looking back, I realize that it really isn’t worth it to say yes when you don’t want to. I have a right to say no and shouldn’t be afraid of letting other people down at the cost of my own happiness.

If you have also decided that it’s worth it to you, and want to learn to say no, try these simple yet effective tips for doing so with confidence.

Helpful Tips for Saying No

Learning to say no has been one of the best things I have done for myself. Not only has it challenged me to overcome my fear of rejection, it has helped me feel in control.

I don’t feel trapped, resentful, or guilty anymore. Instead, I feel empowered and free.

If you want that same feeling of freedom and empowerment, then take control, challenge yourself, and learn to say no.

Chantalle Gerber is a writer and co-founder of Want2discover. Visit her website for more great articles on self-improvement and how to live a fulfilling and happy life. Be sure to download a copy of her Free Ebook: 15 Simple Steps Towards Happiness and Success.

How I Healed My FOMO and Started Saying No

How to Say No Without Feeling the Need to Make Excuses