Why Being Scared Means You’re Fully Alive
By Jo Casey 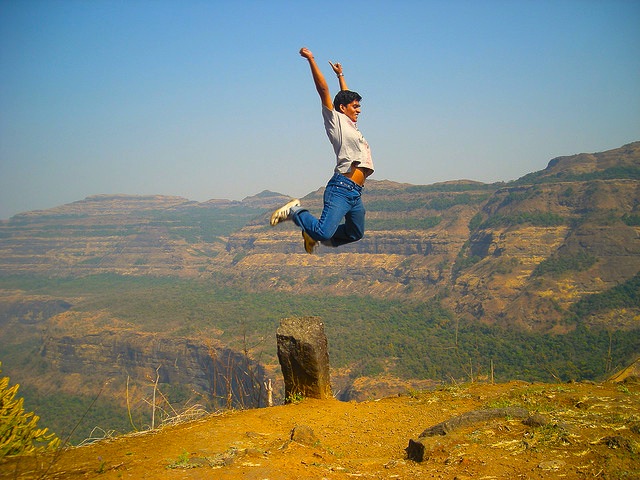 “To be fully alive, fully human, and completely awake is to be continually thrown out of the nest.” ~Pema Chodron

Last year I decided to do something I’d always longed to do but had never been brave enough to take the plunge: I started my own business. Not only was it a new venture, my business would be based around myself—my skills, knowledge, and experiences.

My emotions swung from terrified to awkward and uncomfortable. Seriously, that’s how good it got, at least initially! It’s been exciting and exhilarating, but not in the least bit comfortable.

Here I was, standing for the entire world to see as a self-proclaimed “person who knows quite a lot about some stuff.” I may as well of had my subconscious make me a T-shirt that read “Who the hell do you think you are?”

Revealing things about myself was not comfortable at all. Opening up about my years living with depression—an illness whose superpower is convincing its host that they are worthless and weak—left me feeling vulnerable and exposed.

To acknowledge my depression, and put myself out there as someone who knew quite a lot about a certain subject, was nothing short of excruciating at times.

But I had my secret weapon. Over the years I’ve gathered a group of people who “get” me. People who love and approve of me and what I do. I’ve always felt like this tribe insulated me from the feelings of exposure and judgment I might get from other people.

One person in particular, who’s been my teacher on one of my courses, is someone I particularly admire. I basked in the warm glow of his encouragement and positive feedback; I felt approved of, nurtured, and safe around him.

Because learning is something I hold dear (and I was utterly clueless about it) when I started my business, I decided to take some courses in marketing and business building. This seemed a better strategy than stumbling my way through blindly, so I hovered up new information like I was starved of it.

I started implementing. I made gazillion mistakes but I kept going. I kept remembering the phrase “There’s no failure, only feedback”—and I was getting a hell of a lot of feedback!

But I learned that I was much more tenacious than I’d first thought. There were lots of challenges, but I overcame or circumnavigated them. I kept moving forward. I felt a teeny bit proud of myself.

I gradually became more courageous and shared more of the real me with readers and workshop participants. I became less of the safe, corporate “me” and more of the real, flawed, goofy, “me”—complete with opinions, imperfections, and history.

I told my story of experiencing depression for years and rather than being lambasted for it, the connections I made with my students and readers were profound and rewarding. No one told me they thought less of me for it; if anything, they thought I was brave.

Work started to come in—a trickle, but definitely a move in the right direction. As I took my wobbly steps one after the other, I started to feel stronger and more confident. My tribe was great—super supportive and really encouraging. It felt good.

Apart from one thing.

The teacher I admired so much didn’t seem approving. In fact, he seemed critical and dismissive of what I was doing.

And I felt crushed.

When we’re trying something new we can feel fragile, and any little thing can dent our confidence and break our resolve. It’s even more acute when we’re putting ourselves out there, whether that is through our creative work or our personal stories.

When someone doesn’t approve of our work, it’s like they don’t approve of us. And this is painful—especially when the person in question is someone we admire and crave approval from.

I so wanted him to get it—to support and champion what I was doing. But he didn’t. He wasn’t nasty or cruel; he’s a kind and warm person and that would be totally out of character for him.

But his response was somehow harder to deal with. He was dismissive and uninterested.

I bundled up my courage and asked him if something was wrong.

“No,” came the reply, complete with furrowed brow and an edge of confusion in his voice. “I don’t really get what you’re doing. For me, it doesn’t work.”

Because all of this self-growth stuff is a journey without a destination (the journey is the destination) I know that I would have responded in different ways at different times in this journey. Here are some past options:

1. Stop completely. This feels too hard/scary and unsafe. I am obviously not good enough and certainly not strong enough to carry on.

2. Stop, retreat, and go back to my original, “safe” world. Try and replicate whatever advice my teacher gives me, encompassing his philosophy, beliefs, and experience. I disappear but at least I don’t risk feeling unlovable.

3. Rationalize his behavior; put it down to envy at my emerging success, or insecurity on his part for moving on from his teachings. I mean what’s his problem?

4. Carry on, feeling the pain but moving through it anyway.

To be honest, all of these were tempting. Having an excuse not to be “out there” feeling exposed and vulnerable was very enticing. I could go back to being safe, anonymous, and totally invisible.

Even though it would be like silently dying inside everyday.

So that wouldn’t really be a viable option then! I needed to do something different. I needed a shift of perspective. My teacher isn’t a cruel or vicious man, and his comments weren’t meant to wound me. So why was I hurt that what I was doing didn’t work for him?

That was it; that was the shift I needed. What I was doing didn’t work for him. Instead of beating myself up and falling into a pit of “what’s wrong with me?” I realized it wasn’t about me at all.

I’m a keen cake baker, and if I make a carrot cake (one of my favorites) I don’t get offended if someone says “Oh, thanks but I don’t really like carrot cake.”

I know that this situation is different from a cake, but the analogy still holds. My teacher wasn’t saying, “I don’t like you.” He was saying that what I was writing about and publishing as part of my business didn’t work for him.

So this was the response I chose instead:

Realize that we’re on different paths. I don’t need him to approve of and like 100% of what I do. I know he respects me; it’s just not his thing. It’s my thing.

It’s carrot cake. And there are plenty of other people out there who really like carrot cake.

I don’t need everyone to appreciate the same things as me. My sense of self isn’t entirely dependent on what other people think. Hell, I’m still human; of course it still feels great when other people affirm me, but I don’t need it to still be okay with myself.

Inside the nest feels safe and warm.

But outside of the nest is where we learn to fly—feeling scared, but awake, alive, and fully human.

Jo Casey is a resilience expert, trainer and coach who’s on a mission to help people increase their joy, passion & impact at work. She’s a mama, recovering perfectionist, yoga addict and baker of a mean sponge cake. Visit Jo at www.jocasey.com where you can sign up for her free ‘Work Happier Now’ course. Or you can follow her on Facebook and Twitter.

The Secret to Staying Motivated (and Motivating Other People)