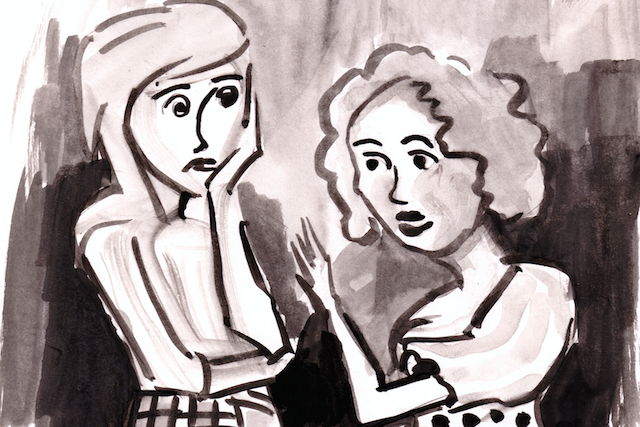 Have you ever felt the urge to fix someone? And by fix I mean observe their circumstances and tell them what you think they’re doing wrong and exactly how you think they should fix it?

We’ve all done it. We’re all guilty.

Especially with close friends or family.

“If he would only listen to me and do what I say then everything would work out just fine!”

I was having tea with a good friend the other week (let’s call her Sally), and she was relating with much exasperation the story of how her sister was wasting her life in her corporate job when she was SO creative and should be working for herself in a creative role. And then she would be happy (according to Sally). Which apparently she’s not (according to Sally).

Sally went on further to say (with as much exasperation) that she had called her and conveyed this opinion to her sister. Because Sally felt she was right and that her sister needed saving. Not surprisingly, it was not very well received. In fact, Sally’s sister was pretty miffed. And didn’t take the advice. Or speak to her for ages.

I’m willing to bet Sally’s sister didn’t even consider the advice. Not for a minute. And not because she disagrees but more likely because she’s offended at being told what to do. After all, she didn’t ask Sally for an opinion.

And there’s the first problem.

If someone doesn’t ask for your opinion, they’re likely not open to it hearing it.

When you ask a question it’s because you’re interested in hearing the answer.

Which means you’re interested in the topic being discussed.

Which further means you’re going to consider the answer with interest and (hopefully) decide from an unemotional stance as to whether you agree with it or not.

The opposite applies when an opinion—however well intended—is provided without your consent.

Had Sally’s sister called and asked for advice, the outcome may have been quite different.

In my early twenties I remember having tea with my mom and enthusing excitedly about a new business idea I’d had. Now, my mom was from the “old school” where job security was your first priority, and in her world it was safest to find a “nice” job in a “nice” company and stay there until you retire or die (whichever comes first).

Unsurprisingly, her response to my idea was one of complete skepticism and doubt. Which she verbalized immediately. Very loudly. And critically.

In those days I didn’t have the awareness I have now. I didn’t see that this was simply her own fears being transferred onto me and had absolutely nothing to do with me. Nope, I reacted. Badly. And took it personally.

After all, I hadn’t asked her for her opinion. I was just sharing an idea.

I had expected her to be enthusiastic about my enthusiasm. To be supportive. To trust my judgment.

Instead, I felt incredibly crushed. And I started doubting myself.

And I felt a lot of anger toward her.

But most importantly, I stopped sharing my dreams with her. And over the years I told her less and less. Because I knew she’d give me her (fearful) opinion. For which I had never asked.

The second problem is, you’re assuming the person needs fixing, that what they’re doing is “wrong.”

Our journey in this lifetime is our own. We’re the only ones who know what is best for us. And only we have a full perspective of all the elements of our lives and how they serve us.

Even when we’re facing challenges, they are ours to face down. Our way. And when we see fit.

Yes, we need to take responsibility for any fall-out, but isn’t that where our growth lies? Making choices and then dealing with the consequences? Good or bad?

Maybe Sally’s sister is comfortable in her current corporate position. Maybe she feels secure with her stable income. And maybe she uses her creativity in a different way within her current position.

Maybe from her perspective she doesn’t have a problem.

My parents had a terrible relationship. At least that’s what I always told myself.

There was little or no affection. Ever.

I always wondered why they stayed together. Surely they would both be happier apart? This relationship was simply wrong.

In my view it epitomized the very essence of all the things you shouldn’t do or be in any relationship. And I told my mom this. Even though she hadn’t asked.

Shortly after they both retired they moved to the coast to be closer to their grandchild. My dad had always been a workaholic and in his career he had travelled a lot. Not surprisingly, this really suited my mom. She loved her own company. Now in retirement he was home. All the time. And followed her around like a puppy.

She was unhappy. Incredibly so. And would vent this to me at any opportunity.

From my perspective, the answer was obvious. It was time to end this sham of a union. And I told her just that. With abundant justification and a healthy dose of righteousness.

But she didn’t. I don’t even think she really heard me. She did what we all do when we get uninvited “solutions” to our perceived problems: She got defensive. Really defensive. About her marriage and my dad.

And we argued quite aggressively and loudly. And then we didn’t speak for many weeks as we both simmered in quiet indignation. I absolutely believed I was right.

And yet, now that I’m older and wiser, I can look back and see that in my parents’ world it was right.

For her. And him.

We can never know how someone else’s circumstances (however bad they seem) will serve them in the bigger picture of their life’s journey.

We can never know what someone else’s perspective is around an event that we may judge as bad. Or wrong.

Maybe in their world it’s right. Or good.

It’s hard (really hard) to watch people we love go through hardship. Our instinct is to help. Or fix.

In any relationship our only obligation is to show up and bear witness. Unconditionally. That’s all. We only ever want to fix someone because ultimately it’ll make us feel better.

Why do we feel uncomfortable when someone close is facing challenges? Maybe that’s the question we need to ask ourselves.

Sometimes feeling discomfort is what provides the momentum that’s needed for that person to make some changes. In their own time. Not ours.

Trust that their judgment will serve them irrespective of whether we agree with it or not.

Try it next time you feel the urge to fix.

That’s your growth right there.

There is No End Worse Than the End of Hope

Why No One Wants Unsolicited Advice (and What Actually Helps)