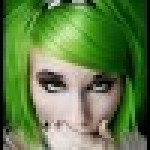 When you've been to the depth of the darkness, as I have, you learn to appreciate the light. I'm doing my best to heal and grow, to become the best version of me, live the life of joy I envision in my mind and help others achieve that too. I have a long way to go, but I keep trying. I aspire to be a writer, I have written since childhood, quit after my dark night [years] of the soul, and am returning to that hobby as of 2019. I am a proud Pagan who loves tea, anime, and writing. I'm striving to better myself and find balance in my life.