Break the Cycle: How to Stop Hurting Others When You Were Mistreated
By Vishnu 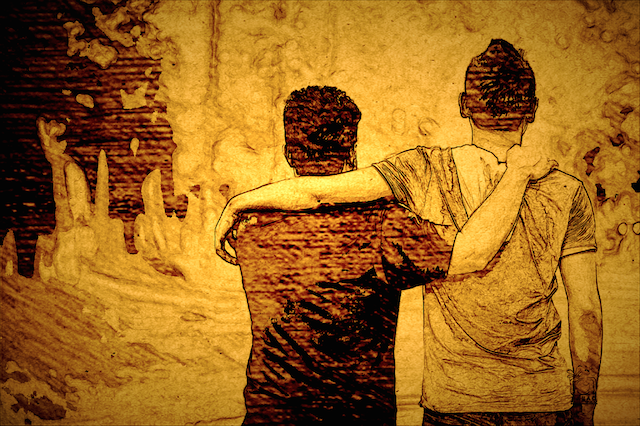 “What’s broken can be mended. What hurts can be healed. And no matter how dark it gets, the sun is going to rise again.” ~Unknown

I grew up with difficult and hurtful parents who spoke critically, with the intent to demean.

Each word of sarcasm, each thinly veiled joke or put-down undercut my self-esteem. Each knocked me down a rung in life and kept me from my potential.

Rampant comparisons to other Indian kids succeeding academically, attacks of my mediocre performance at school, and harsh language were my mother’s weapons of choice.

When someone attacks your self-esteem repeatedly, you feel beat down. It feels like you were meant to fly, but your own family is making you drown.

Then, your natural tendency might be to do to others what someone has done to you.

My tendencies were to judge and compare others in my mind, to taunt and verbally attack them. It was fitting then, I guess, that my career path led me to becoming a lawyer, now an ex-lawyer.

As I got into the habits of sabotaging and hurting others, I never thought much about it. I just assumed that because my parents had talked to me harshly and treated me badly, I had the license to do the same to others.

You, too, might have grown up in a household that wounded you deeply. You might have never been able to leave the shadow of the pain and suffering you experienced. And you might have learned to treat people as others once treated you.

I’ve come to believe that just because others hurt us, that doesn’t mean we have to continue the cycle of abuse.

You don’t have to fall into your natural, default behaviors. You can change. You can choose different actions and make different decisions. You can break the cycle of negativity, criticism, and abuse.

Here are six steps to heal the pain you felt and end the cycle of hurt.

1. Work on forgiving those who hurt you.

This may be much more easily said than done, but forgiveness is the key to healing. If you can’t forgive today, at least set the intention to forgive. It doesn’t matter how tragic or traumatic your past was; you must forgive for yourself. You’ll feel like a heavy weight has been lifted from your shoulders. You will be able to breathe much more easily.

It helps to put your abuser’s behavior in perspective so you can see their actions in a different light.

Try to understand what influenced their behaviors and characteristics. For example, with my parents, they were likely raised in a similar way. Also, culturally, parents in Asia tend to be direct and hold you to high standards because they want you to succeed in life. Their intentions may have been ultimately good, but the way they went about parenting was misguided.

Look at them through a lens of gratefulness. What could you appreciate about them, in spite of the pain they caused? Is there anything you can appreciate about the pain? I owe my sense of compassion, which is the foundation of my work, to my parents. Because of how I was hurt growing up, I now do work that reduces suffering and helps people find peace.

2. Work on your own healing.

Instead of burning in anger and hatred, focus on what you need for your emotional and mental health.

Assess the damage they’ve caused, look at the impact their behavior has had on your life, and determine what you must heal.

Visit a counselor if necessary. Find coping mechanisms. Write about your hurt. Open yourself to a spiritual practice. Seek the tools that can help you heal your emotional wounds.

Cultivate love for yourself. Speak to yourself gently. Let go of your high demands and expectations of yourself. Notice if how you treat yourself is similar to how the people who hurt you in the past treated you.

Watch your behavior and notice what you do when others hurt or anger you. How do you react when others push your buttons?

If you don’t know how to respond or react differently from the people who raised you, look for alternative role models. Seek people with positive and emotionally healthy ways of responding to personal situations.
Study them. Take notes. Notice how they handle trying circumstances. Model their behavior in your own interpersonal relationships.

If you were taught destructive and dysfunctional ways of being and speaking, opt for alternative ways. Hold back on hurtful words, convey your needs with softer language, and respect other people’s boundaries. Practice listening intently instead of responding rashly to what others say to you.

Recently, someone told me that I couldn’t park my car in a particular part of a lot and had to park much further back and walk. The area I had parked in was for the vendors of the event I was attending.

My first reaction was to fight back, use the parking lot rules against them, ask for the manager, and make a big scene about how unjust it was for me to have to move my car a couple blocks away where there was clearly space right there.

Then I noticed the person was wearing a volunteer badge and had an overwhelmed expression on his face. I opted not to do what my defacto behavior was and instead chose understanding. I tried to see that he was doing the best he could and was just looking out for the vendors, who were critical to a successful event.

Even if this person was wrong and even if it was unfair, I could still make his day a little less stressful and more pleasant. I could avoid arguing, making a scene, or verbally attacking someone who was trying their best to serve others.

5. Focus on your reactions instead of the behavior of others.

You can’t control others’ reactions, but you can learn to notice, change, and improve your own.

Look for triggers and other behavior that provokes you. Notice your immediate reaction when people treat you badly, disrespect you, or lash out against you.

Instead of immediately engaging with this behavior, withdraw, reflect, analyze, and take a thoughtful next step.

This is what I had to do when I was talking to a woman I had recently met, who was not a fan of the type of writing I do.

I found her remarks dismissive and non-supportive, and felt like lashing out. I wanted to attack her in some way or put down some part of her life that she valued, but after several days and after much calming down, I focused on my reaction. I let the anger simmer, re-evaluated her simple preference for fiction writing, and came to the conclusion that different people have different reading preferences.

I was still hurt and told her so without demeaning or attacking her in return. I was able to communicate that I was hurt, which she apologized for, without hurting her. A win!

Remind yourself that even if you grew up with challenging people and the darkness of human behavior, you get to choose how you treat others and show up in the world.

You can operate by the default of hurting others—or, worse, seek revenge—and mimic the harmful and negative habits you witnessed growing up, or you can actively take different steps and make different choices.

You can bring yourself out of the darkness of bad behavior, cruelty, abuse, and negligent child rearing. You can go out in the world choosing love and spreading your light of compassion and understanding.

You can be the conduit who transforms pain into healing, not only for yourself but for everyone around you. You can show others who are hurting that forgiveness, understanding, love, and compassion are possible even after you’ve been hurt. And in doing so, you can help make the world a less hurtful place.

Vishnu is a writer and coach who helps people overcome breakups to rebuild their lives and live with purpose.  He blogs at www.vishnusvirtues.com For Vishnu's latest book, 10 Sacred Laws of Healing a Broken Heart, visit his Amazon page here.