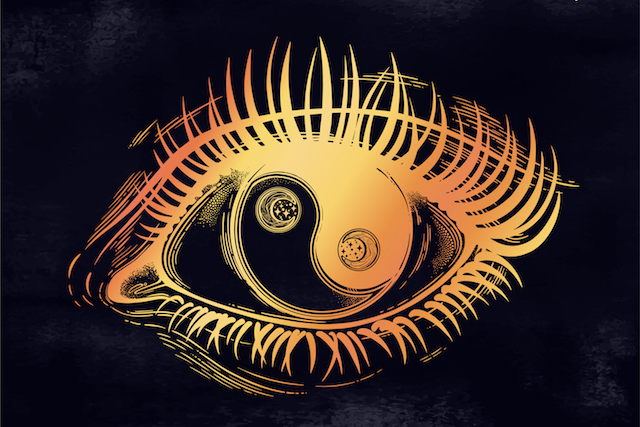 “You are the sky. Everything else—it’s just the weather.” ~Pema Chödrön

A farmer has a horse for many years; it helps him earn his livelihood and raise his son. One day, the horse runs away. His neighbor says sympathetically, “Such bad luck.”

The next day, the horse makes its way back home bringing with it another horse. The neighbor says with a smile, “Such good luck.”

The following day, the farmer’s son rides the new horse and seeks to tame it. In the process, he breaks his leg. The neighbor says sympathetically, “Such bad luck.”

The last day of the story, the military comes to the village to draft all able-bodied young men to fight in a war. The son is exempt from the draft due to his broken leg. You can guess what the neighbor said, and how the farmer replied.

This Zen Buddhist parable illustrates that we never really know exactly why things are unfolding the way that they are, and that labeling them as “good” or “bad” is useless. It only gets us wrapped up in the ups and downs.

Riding the car of this dichotomy only takes us on a roller coaster ride while our emotions are following whatever storyline is in front of us.

Because I’m a human, I do this all of the time. I think that something fits neatly into either category, and I place it there then try to not look back. Usually that ends with those contents spilling out all over the place. Like when I try to make certain foods “good” or “bad.” Food has no morality, and categorizing it in this way just brings me shame.

David Allen explained that the Taoists have their own way of interpreting the complication: the yin and yang symbol. “Good” flows into “bad” and the two are even contained in one another. They can’t really be separated.

Not too far out of college I had a cushy tech job that I absolutely adored. I relished in the fact that I was doing what I loved, and that I had been promoted to that position after working really hard.

The perks were great. We had flexible hours, leaving room for naps on my work-from-home days. My favorite perk was a giant snack room, full of all kinds of goodies. We were swimming in startup benefits, and by all measures, I was happy. However, I didn’t realize I was overworking myself until I collapsed.

The long hours had taken a toll on me, emotionally and physically. My romantic relationships had also gotten me down. I’d been causing myself a lot of pain by continuously going after emotionally unavailable people. I had also been neglecting self-care, sleeping much less than my body required. My mental health deteriorated to the point where I no longer felt safe in my own skin.

I’d struggled with my mental health throughout my life, but I thought I’d gotten to a good place. Turns out I was wrong. My mind had been slowly building up to a bipolar explosion that mixed mania and depression.

My mania manifested itself in staying up too late, having impulsive sex, and taking on way too many responsibilities at once. My depression took the form of feeling worthless and losing interest in things I loved, and my hunger was either through the roof or absent. Suicidal ideation was a big part of the mix. This was the scariest part—the fact that I’d lost the will to live.

As a result of all of this, I had a breakdown. I could often be found writhing in emotional pain, my brain wanting me dead. How quickly this “good” turned to “bad.”

Because I was deemed unsafe, I was taken by ambulance to a locked ward. Turns out when you show up to the hospital telling them you’re suicidal, they cart you away to a locked facility of some sort.

Everyday things like my laptop cord and makeup mirrors were taken from me, lest I harm myself. I slept in a hallway of sixteen girls, and a nurse opened our doors every fifteen minutes at night to check to see if we were still breathing. The food was subpar at best.

I wanted to die. I had a total mental health collapse and realized I had been running myself ragged at this job. I had to quit it because I knew that this hospital stay wasn’t going to be a quick fix. I had seven more hospitalizations that year, and I thought that my life was over.

While reflecting on what had brought me to this point, I realized that not only was the job overly demanding on my time, the office had terrible boundaries, with lots of people dating one another (including myself at one point). Most harmful, though, was the unlimited stash of anytime booze. I’m a recovering alcoholic, and though I was able to stay sober, this wasn’t a healthy environment for me.

Later, reflecting on the time I spent hospitalized, I realized my experiences weren’t all “bad.”

My time in and out of psych wards has reminded me how strong I am—the strength it took to get help instead of killing myself was something I didn’t know I had. I thought I’d stay on the path to destruction for much longer, but my will to live came through.

Also, I was shown, despite my skepticism, that I’m indeed never alone; my loved ones showered me with support. People regularly visited me in the hospital, and their presence helped me heal.

My friends showed up without judgment, holding space for all of my big feelings. They brought nothing but love (and some snacks). It was vulnerable to be seen in the condition I was in, but my friends proved they could be trusted to be with me in this state. Many of them had been in my shoes before, so they held compassion for what I was going through.

Most of the friends that visited were AA companions. They were people trying to stay sober, just like me, and we were living many of the same values like acceptance and taking life one day at a time. With their support, I continued on the path of healing both inside and outside of the hospital.

I’ve even managed to find the “good” in alcoholism. In fact, I now believe it’s one of the best things that’s ever happened to me. My recovery has brought me beautiful friendships, immense personal growth, and ridiculous amounts of resilience. I’ve learned to be there for another person without constantly putting myself first, and I’ve grown to be a better partner.

It took eighteen months of rest before I was ready to go back to work. I struggled with feeling inadequate and useless during this time. I was so accustomed to working like a maniac that rest felt foreign to me. But I’m now finally well enough to work, though I’ve gotten a job that pays much less than my last one and it isn’t even close to as prestigious. I’m calling it my “get-well job.”

I’m still working through some shame around it, wanting to call this “bad,” even though I know it’s a mix of things. Instead of calling it “bad,” I do my best to return to “maybe” with a shrug.

I’m not saying that I’m able to be perfectly non-judgmental and unattached, living without worry at my job and feeling perfectly confident when talking about it. But some days I can just let things be what they are. I can notice that voice inside that’s yelling at me and I can soothe it. I can create a new script and I can practice radical acceptance by not fighting against what’s going on in my mind.

I don’t know why things happen the way that they do, and I never know what’s going to happen next. Perhaps this job will benefit my life in ways I could never predict. Maybe it’ll keep me where I’m at, or make things worse; I just don’t know.

The thing is, though, once I start to move past outcomes I can be more present to and flexible with what’s happening.

I can just enjoy learning to use the espresso machine at my new job rather than worrying about what people think of my new job choice. I can practice gentleness around my mental health, remaining non-judgmental when I have a difficult day. I can do this instead of thrashing against what is, letting my mind carry me to dreams of what could be and feeling angry about how things are.

I can work with whatever emotions come up, knowing that it’s all the path. I can’t prevent life from happening and I can’t always force what I want to happen. What I do have control of is l how I react to everything, and today I’m trying to have a “maybe” attitude.

No matter what happens, I know I can handle it. Being knocked down by my job and mental health reminded me that the human spirit is wildly resilient. I got back up; I did it very slowly, but I did it.

When Things Don’t Work Out: Who Knows If It’s Good or Bad?

How to Accept Anxious Feelings So You Can Let Them Pass