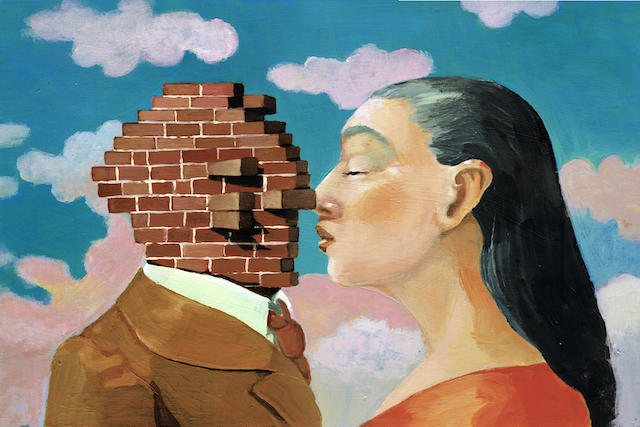 In January, a couple of years ago, I had been declared unfit for work, suffering from anxiety and mental exhaustion. For too long, I had not listened to my body and soul complaining about all the heavy burdens I had been carrying.

Out walking at this time, the bitter cold and relentless rain felt like a blessing to me, grateful to at least feel something. It was on one of these walks that I first bumped into an old school friend, hearing him call my name before I saw him smiling hello at me.

To begin with, I felt reluctant to chat or attempt to return the happy smile as he asked after my brothers, having known us since we were all kids, but I began to walk away feeling a bit less tense and felt an urge to see him again: “Call in for a cup of tea if you’re passing.”

And he did call. But I wasn’t in—I was out battling the elements again, trying to walk through my confusion and melancholy. My adult son called me: “Some weird guy with a ponytail has just knocked on asking for you,” he voiced with scarcely concealed outrage.

I’m not sure whether the outrage was caused by the fact that a man had knocked on our door asking to see his mom or whether it was at the audacity of the man’s long, graying ponytail, at his age.

A week later, he called again and this time I was home. I welcomed him in and shut the door against the winter blackness. The house felt cosier somehow since he was there, noticing my daughter’s artwork on the wall before he had finished taking off his shoes.

Sat together in the lounge, I was struck by the way he curled his feet up easily on the chair as I sat upright and uptight on the couch opposite. Before long, I had confessed my inability to work. He shared that he was off work too as he had recently lost his father and that his mother was now terminally ill.

The next time he called I was out again, so he pushed his mobile number through my door. I lingered looking at the bold handwriting in crimson ink. I do remember I hesitated before I put his number in my contact list.

Why did I want or need his number? Maybe I had identified that he was a troubled soul too. I sent him a text saying: “Thanks for your number. This is mine.”

Now we had both admitted that we wanted to be able to contact each other. From this point the texting became more frequent, and so did his visits to me. But then he told me that for the past year he had been living with somebody and her three children.

Classic rebound stuff—he had moved in with her immediately after the end of a twenty-six-year relationship. Of course, I did the decent thing and said we couldn’t see each other anymore. I wished I could have been angry and indignant, but instead my vulnerable self crumpled a little more as he took me in his arms to give me a hug.

I rebuked myself for being in this position when I was in the middle of so much mental and emotional turmoil. I had survived the break-up of a marriage and another long-term partnership—I told myself I could certainly recover from a few-week-dalliance.

“I need a hug,” the message bleeped. So do I, I thought, but steeled my resolve to not return his message. Some time elapsed and then came another message, “My mum has little time left.”

His pain was tangible. So I put my needs on hold and arranged to see him. A pattern began: talking through the night when the rest of the town slept; trips to doctors and hospitals; visits to see his mum together; soup-runs to him at the nursing home. And I suppressed the nagging question about where his ‘partner’ was in all this.

In March his mum died. Our intimate bubble was burst by the grief, practicalities, and conventions of death.  It was his ‘partner’ that stood by his side at his mum’s funeral in April while I sat home alone, bereft at the thought of his loss and facing the reality that I had been cast aside.

I decided I would go away to visit friends for a month to get some distance. I needed to iron out my crumpled life, to see what was worth holding onto and what needed to be discarded.

I also hoped it would give him time to decide if he wanted for us to share a future. Looking back now, I wonder if I was so desperate to be with him because dealing with his pain was a distraction from my own.

“I will be ready for our future when you return.” I was relieved that he was resolved to sort the situation after all of the emotional angst of the previous months. “Only collect me from the airport if you are sorted,” I urged.

The night before my flight he still hadn’t confirmed that he had left her. I needed to know the situation I was walking into: “Sorted?”

“Not quite.” I know, not very fair of him, right? Not just to me, but to his partner who must have felt painfully his constant distraction. I had a long-haul flight to dwell on how another month could have elapsed during which he had made regular and frequent contact with me, promising me a future together, only to have let me down again.

Jet-lagged and sleep deprived, I sat dejectedly in his car—hardly the homecoming I had hoped for. I might be a programmed people-pleaser, but even I could see this was going to dent my damaged self-esteem even further.

“There is no relationship until this is sorted.” I stopped contact with him, but emotionally I hadn’t let it go since the promise of a relationship was still on the table.

Eventually, he decided he would see a hypnotherapist. He began telling his painful tale. But it was still not completely told: he gradually moved his stuff out from her place but couldn’t quite tell her the final line of their story: “I have to leave you now.”

I didn’t see him for over a year as he tried to muster his final resolve. I knew we three were squirming our way through lonely nights and taut days, as we crawled, emotionally spent, toward the end of our story. I knew that it would involve a final, painful telling of, “It’s over,” from one to the other of us caught in this mess.

I had always imagined that it would be him that would make that call to either her or me. This shows just how powerless I felt. It is evident to me now that the three of us were caught in this web for one striking reason: we each didn’t love ourselves enough to withdraw from this damaging situation.

I am so grateful that I eventually gave myself enough distance to heal myself properly. I now really understand what people mean when they say you have to be ready for a relationship. I became strong and I learned how to love myself first.

So strong that I moved away from my old, unhappy life and took myself on an adventure where I had time and opportunity to listen to my own needs. I had spent months trying to fix a damaged and broken man instead of fixing myself.

Many, many months later, when I had a new life and was at the beginnings of a new relationship, he turned up, out of the blue, and asked me to marry him. He hadn’t quite left her yet but would be leaving her that night. It was me who said, “You’re too late. It’s over.”

I’m not proud of my part in all of this. But I have forgiven myself as I know I was so emotionally vulnerable when he first came into my life.

Following this emotionally exhausting experience, I have learned:

It was painful to tell you this; to be reminded of how little I valued my own needs, putting his pain above my own and hers too. I am happy to say I now don’t recognize the me that was so damaged and broken.

I love myself everyday and I’m delighted to know that “nothing can dim the light that shines from within.” (Maya Angelou)

Louise is a writer and poet who is happy when she’s growing. Her recently published personal-growth book, The Year I Lived With a Psychic, tells the true story of her adventures living with psychic medium, Joyce Vernon. You can contact her on Instagram here.

You Have a Choice: Your Future Can Be Better Than Your Past