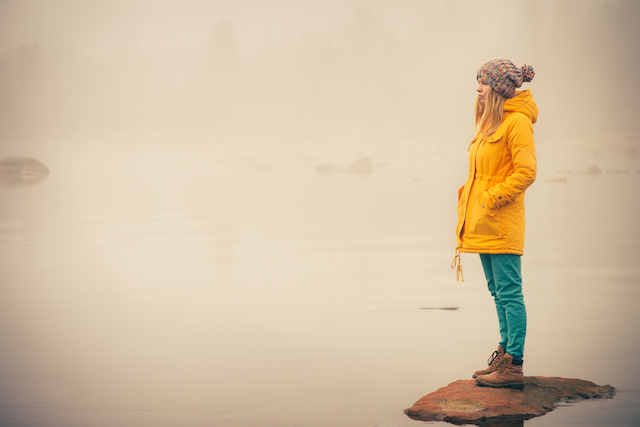 “Never apologize for being sensitive or emotional. Let this be a sign that you’ve got a big heart and aren’t afraid to let others see it. Showing your emotions is a sign of strength.” ~Brigitte Nicole

We have a problem in the modern world that needs to be addressed.

It impacts huge numbers of the population but is so ingrained in our culture that it’s easy for us to overlook how dangerous it can be.

This problem is the denial of sensitivity.

We often associate sensitivity with weakness, but when we learn how to manage our energy and emotions we can actually become more controlled, empathetic, and driven.

Most people suppress their sensitivity, not realizing that it’s a very powerful source of productive energy once they can learn how to accept it and direct it toward something positive.

For a large portion of my life I would feel emotions very intensely, whether it was while watching movies or noticing the feelings of those around me. I guess you could say I was a natural empath.

Unfortunately, I did what most people do in Western society—I cut these feelings off at the source, intellectualizing everything and separating my head from my body.

However, over time I eventually learned that the more I avoided feelings, particularly negative ones, the longer they would persist. It was almost impossible to let go of things. It wasn’t uncommon for unresolved issues that I hadn’t thought about in years to come up in a dream.

Now through meditation and mindfulness practices I’ve learned to sit with my emotions and use sensitivity to feel more joy, be guided by my gut, and employ all that emotional energy in creative and constructive ways.

Why Do We Deny Our Sensitivity?

According to Researcher Elaine Aron, about 15-20 percent of the population are highly sensitive due to the nature of their nervous systems. These people generally have an inclination toward overstimulation, emotional reactivity, and empathy.

Whether I fall under this umbrella or not never interested me that much. What interested me was that our culture often finds it culturally inappropriate to experience or express sensitivity, even though there are millions of us living somewhere on that spectrum who could get much more out of life if we just learned to use our emotions!

How Can You Turn Your Sensitivity into a Strength?

There are many ways to do this, and it’s partly going to be dependent on you as an individual. However, there is an overarching point to keep in mind, and that is to accept yourself and your emotions as they are, not to repress or avoid them or to feel guilt for having them.

You want to stay as far away from a lot of these as possible, as they can be confusing and dangerous. Just try to experience the emotion as is and accept it for what it is.

Recently I had an experience whereby I caught myself doing just this. I found myself in a social situation feeling frustrated with someone else’s behavior. I then became judgmental of my own frustration—it didn’t fit with my self-image of being cool, calm, and collected—and this morphed into anger at myself.

After a five-minute dance of unnecessary negative meta-emotions, I was able to catch myself and realize that it was okay to just allow myself to feel frustrated. The person I was dealing with isn’t perfect, and neither am I.

Sitting with Your Emotions

Most people have a whole host of conscious or unconscious avoidance behaviors that stop them from feeling both negative and positive emotions. Their sensitivity can make it seem like the experiences are too overwhelming, so they intentionally cut them off.

This can be something as simple as turning the T.V. on after work to avoid reflecting on the problems of the day, to avoiding commitment to a lifelong partner or drinking to numb the stimulation of complex social environments.

In fact, one way I personally used to deal with this was to read books, particularly about psychology, philosophy, or spirituality. By doing so, I was ignoring or intellectualizing any confronting emotions I had, which gave me an excuse to ‘deal’ with them without actually dealing with them.

I’d also find myself diving head first into new projects or jobs or even sometimes travelling to new cities, because at the time they seemed like a quick fix solution to any uncomfortable feelings I was experiencing.

To counteract this tendency, which we all share to some degree, we need to recognize an emotion when it is there, accept it for what it is, nonjudgmentally, and physically sit with it for moment before letting it go.

Make Use of Your Passion and Creativity

One trait that often comes with being sensitive is being passionate and creative.

Sensitive people are often artists, and vice versa, as they are more aware of their emotions and better able to communicate them to others through their work. Sadly, traditionally schooling tends to value science and business related skills from an early age, and so as children we may be encouraged away from our creative endeavours.

If you feel you are passionate about something you should never shy away from following it, no matter what anyone else says. You should use any strong feelings you have as a compass that tells you what you want to be doing with your time.

Sensitive people often tend to be very reflective. If they spend too much time in intense environments (which is most of the time in large cities) they can become overwhelmed.

We can use this to our advantage by engaging in reflective practices such as journaling, and allowing ourselves time to let our batteries recharge.

By taking specific time out of our day to stop and think, whether that be at home or in nature, we can become more aware of our situation and the subtle nuances that are impacting us in our day to day lives.

Suppressing our sensitivity is never a healthy option. If we can learn to manage it with these practices we can use it to our advantage and allow it to become one of our biggest strengths.

How have you managed your sensitivity? Have you found any ways that help you to use it to your advantage? Let us know in the comments!

Ben Fishel is a transpersonal psychotherapist. He has a background in neuroscience, counseling and existential psychotherapy and is on a mission to help people improve their mental health with cognitive science and spirituality. Ben offers online therapy worldwide (with the exception of Canada & the U.S.). You can book a FREE 15-minute call to see if you’d like to work with him—and don’t forget to follow him on Facebook for more of his essays.

How Embracing Your Sensitivity Can Benefit Your Relationship

The 11 Most Common Myths About Highly Sensitive People